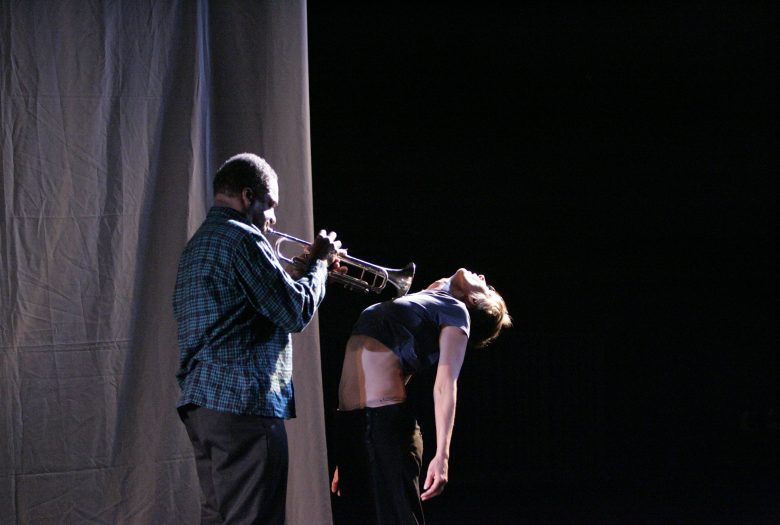 In 1999, K.J. saw a total eclipse of the moon on the coast of Oregon and a couple of months later heard three trumpeters play at Tonic, a jazz club in New York City. There was something very similar between the two experiences and it inspired her to create c o n s t e l l a t i o n, performed by three trumpeters, three dancers and a drummer in various venues in New York City, San Francisco and London through 2006. Roy Campbell, Jr. was the first trumpeter K.J. worked with upon an invitation from Patricia Parker and the Vision Festival. Tonight’s performance is a tribute to Roy and his music and inspiration.

K.J. Holmes is an independent dance artist, singer, poet, and actor. Her training began as a child with ballet, musical theater, judo and fencing. Her dance studies at the New School for Social Research and Ideokinesis with Andre Bernard in 1980 led her to improvisation and new dance techniques. K.J. has helped to define, first as a student and now as a teacher and performer, many contemporary improvisational practices, collaborating with Roy Campbell Jr., Dave Douglas, Simone Forti, Karen Nelson, Lisa Nelson and Image Lab, and Steve Paxton. A graduate of the 2 year Sanford Meisner acting training with master teacher Terry Knickerbocker (2009), Satya Yoga (2007), and The School for Body-Mind Centering (1999), (of which the play between is essential to her current practices), she has a private practice in Dynamic Alignment and Re-Integration, is adjunct faculty at NYU/ Experimental Theatre Wing, teaches through Movement Research and travels throughout the world teaching and performing at universities, festivals and venues that range from theaters to site specific locations to living rooms. K.J. recently danced with Miguel Gutierrez and the Powerful People, in The Works of Steve Paxton at Dia:Beacon and in Xavier Le Roy’s Retrospective at PS1:MoMA and was a 2012-14 Movement Research Artist in Residence where she began her new work HIC SVNT DRACONES.