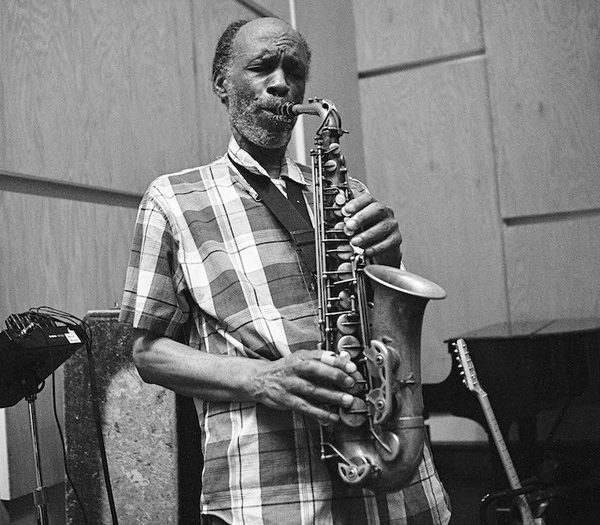 As a duo Daniel Carter and Matt Mikas create improvised dialogues and open-ended conversations that seek to engage and enlighten listeners via saxaphone, flute, sampler, specially pressed records and turntables. The resulting environment is one that acknowledges science fiction soundtracks, hip-hop minimalism, ecstatic free-jazz, and a quest that supercedes both conflict and resolution.

Daniel Carter Flutist/saxophonist/trumpeter Daniel Carter isn’t as well-known as some of his contemporaries on the New York free jazz scene, which may partially be due to the fact that he refuses to name his own projects after himself. But judging from his long history of playing in New York and his winding, exploratory recordings, he deserves to be as well-known as peers like David S. Ware or William Parker. Carter began playing in New York in the early ’70s and he sporadically recorded during that decade with artists such as Gunter Hampel and Bob Moses. But due to his reputation as an avant-garde musician, he had difficulty finding steady gigs and began performing as a street musician around 1978. In 1981, he joined Other Dimensions in Music, a quartet that also features Roy Campbell on trumpet, Parker on bass, and Rashid Bakr on drums; the group released a self-titled album on Silkheart in 1989. During the 1980s, Carter also played with punk rock groups. His recording career really took off in the 1990s. He continued to play with Other Dimensions In Music and began recording with another quartet called Test. Test, featuring multireedist Sabir Mateen, bassist Matthew Heyner, and drummer Tom Bruno, still frequently performs on subway platforms. Carter also recorded with non-jazz acts like avant-rock songwriter David Grubbs and electronic musicians Spring Heel Jack and DJ Logic. Since 1999, Carter has kept himself busy with projects on the Aum Fidelity and Thirsty Ear labels.

Matt Mikas Matt Mikas is a sound artist with a history of involvement in microradio, nightclub entertainment, and museum exhibition. A sonic anthropologist, Mikas uses turntables alternately as a historia n and performer and electronics and low-power FM transmitters as artist and activist. He is also a co-founder of and the operations manager for free103point9, a New York based non-profit arts organization focusing on the creative usage of transmission mediums (www.free103point9.org). He has spoken on independent media actions at the Grassroots Radio Conference, the New York Poetry Project, The Ford Communications Policy Network Meeting, Coco Fusco’s Performance and Technology Classes at Columbia University, among others. In January 2000 he curated the sound program for Dave Hickey’s Ultralounge at the University of South Florida Contemporary Art Museum in Tampa, FL. “Of The Bridge,” a sound and video collaboration with Matt Bua and Tom Roe, premiered in Brooklyn! (2001) at the Palm Beach Institute of Contemporary Art, sampling the sounds of the Williamsburg Bridge and Sonny Rollins (who often rehearsed there). He has also performed at The Kitchen, P.S. 122, and Anthology Film Archives in Manhattan, and the 2004 Gwang-Ju Biennialle in South Korea. Mikas’s current project “Interactive Audio Response Kit” is a musical composition and listening tool created for two identical LPs.

– NRA is a multi-national conglomerate comprised of Tatsuya Nakatani (percussion – Japan), Vic Rawlings open-circuit electronics, amplified prepared cello U. S. A.), and Ricardo Arias (bass-balloon kit – Colombia). The trio creates a sound world that is simultaneously austere and excessive, static and explosive. Their performance practice is firmly based on a kinetic-physical approach to their respective instruments, yet devoid of the heavy-lifting trappings of physical music. The players have concocted their own distinctive instrument adaptations/inventions, and playing techniques, each bringing markedly contrasting sonic materials to the ensemble. Their compositional approach exploits the intersection of these disparate sounds within the confines of particular times and spaces.

Tatsuya Nakatani Originally from Kobe and Osaka, Japan, Tatsuya Nakatani has resided in the United States since 1995. After living in Boston, Philadelphia, and New York, he and is now based in Easton, Pennsylvania. He is recognized as a key player in New York City”šs ever-burgeoning creative music scene. His music often defies categorization and is not limited by generic considerations. His eclectic creative approach welcomes influences from Brazilian and Japanese music; from improvised and experimental music, jazz, free jazz, rock, etc. An intense freedom combined with impeccable sensitivity and depth of thought characterizes his approach. He is widely recognized as a solo and ensemble player. His elements of percussion are drummed set, gong, cymbal, singing bowls, pieces of metal objects, and various sticks and bows. In addition to live performances, he provides sound design for Television and Film, and collaborates regularly with dancers and artists. Nakatani has established an independent Record label, music & dance studio “H&HPRODUCTION” in South Bronx, New York from where he dispatches his music creations to the rest of the world. He is also a recipient of the New York, Bronx Art council individual artist grant.

Vic Rawlings Vic Rawlings is an active member of the Boston improvised music community. His performances focus on the metamusical potential of unstable sounds and silences. He is an instrument builder specializing in modifications of existing instruments. In addition to his extensive cello preparations, he continually develops an electronic instrument from extant analog circuitry, producing, in effect, an analog synthesizer with a highly unstable interface. He performs regularly as a soloist and as a member of undr quartet, The BSC, and in duo and trio ensembles with Michael Bullock, Greg Kelley, Bhob Rainey, Sean Meehan, Jason Lescalleet, James Coleman, Tatsuya Nakatani, and Howard Stelzer. Other collaborators have included Eddie Prevost (AMM), Donald Miller (Borbetomagus), Daniel Carter (Other Dimensions in Music), Laurence Cook, Jaap Blonk, Masashi Harada, and Stephen Drury. Rawlings appears on the record labels Grob, Sedimental, Emanem, Boxmedia, Chloe, Absurd, and Rykodisc. He has performed as a soloist/ composer with Nicola Hawkins Dance Company and has composed scores for films by Alla Kovgan and Jeff Silva. He has toured most of the United States and in France.

Ricardo Arias Ricardo Arias was born in BogotÃ¡, Colombia, in 1965. He has lived in Barcelona, The Hague, and currently resides in New York City. He studied composition and electroacoustic music with Chilean composer Gabriel Brncic at the Phonos Foundation in Barcelona and flute with Hiroshi Kobayashi and Joan Bofill, also in Barcelona. During 1995-1996 Arias studied computer music at the Institute of Sonology in ThaHague. He holds a BA in Anthropology from Hunter College in New York City. Most of Arias’ music is improvised and made in collaboration with other musicians. Apart from occasionally playing the flute, he uses nconventional instruments and found objects as sound sources. He has performed with a shifting array of small found objects, amplified with piezo-electric transducers. Since 1992 he has focused almost exclusively on the balloon kit, a number of rubber balloons attached to a suitable structure and played with the hands and a set of accessories, including various kinds of sponges, pieces of Styrofoam, rubber bands, etc.. Arias has been artist in residence at Harvestworks (New York City, 1999) and at Engine 27 (New York City, 2003) and was a fellow at the Civitella Ranieri Center (Umbria, Italy, 2004). Arias has published essays in Experimental Musical Instruments (Vol. 13, #2, 1997), and Leonardo Music Journal (Vol. 8, 1998 and Vol. 12, 2001).