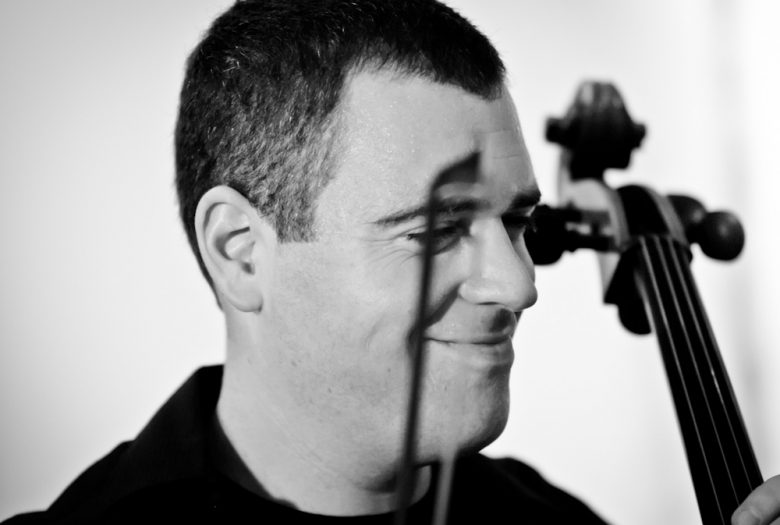 The music we are playing tonight places the cello in the lyrical front and center. It unabashedly embraces the traditional voice and timbre of the cello as found in Brahms and Schubert, while including jazz-informed articulation and phrasing, as well as a variety of extended techniques. What makes this group special for me, more than the unusual instrumentation of cello, trumpet, vibes, and bass, is the individuality and ingenuity of Nate Wooley, Matt Moran, and Peter Bitenc. They are exceptional musicians and I am very fortunate to have their support in realizing this music.

*Levin has a sound that ranges from subtle and understated to
aggressive; with admirable technique as a performer and a compositional
concept that blends structure with freewheeling exploration, he deserves
to have his name added to the short list of cellists who are making a
mark in improvisational music.*
–John Kelman, All About Jazz Magazine

Daniel Levin was born in 1974 in Burlington, Vermont. He began playing
the cello at age six. He has performed and/or recorded with Billy Bang,
Borah Bergman, Tim Berne, Anthony Braxton, Rob Brown, Whit Dickey, Mark
Dresser, Joe Morris, Joe McPhee, William Parker, Warren Smith, and
others. Daniel has recorded as a sideman for Clean Feed, EMANEM, Not Two, and RogueART, and as a leader, for Riti Records, HatHut, and Clean Feed.

“He’s gotten an incredibly personal trumpet and voice vocabulary together in recent years, including a range of deliciously abstract and quiet sounds that put him in a pretty elite category of innovative acoustic instrumentalists. ….expect to really FEEL something when he plays, something new, serious, sublime, para-human, perplexing, something EMINENTLY MINDFUL”.- Philadelphia Ambient Consortium.

Nate Wooley (b. 1974) grew up in Clatskanie, Oregon, a finnish-american fishing and timber town. He has spent most of his musical life whole-heartedly embracing the space between complete absorption in sound and relative absence of the same. Nate’s trumpet playing is considered an organic mixture of new music, free jazz, and noise improvisation traditions. In the context of trumpet improvisation, he has worked diligently to keep one musical foot firmly planted outside of the recognized lineage.

Matt Moran “is the most astonishingly progressive vibraphone player to come along since the Hoggard/Naughton generation of the ’70s… Whether playing angular runs at lightning speed or laying out Webern-esque chords with the intense scrutiny of a chess master, Moran blazes any number of new trails for his instrument.” (Steve Smith, Jazzcorner.com). <http://jazzcorner.com/> Moran plays regularly with the Claudia Quintet and the Daniel Levin Quartet, and leads the brass band Slavic Soul Party! and the recording project Sideshow, which interprets the songs of Charles Ives.

Peter Bitenc grew up in Milwaukee, Wisconsin where he was gigging in local clubs not long after taking up the bass at age 15. Peter attended the New England Conservatory of Music where he studied with Steve Lacy, Cecil McBee, and Jerry Bergonzi and graduated with a degree in Jazz Studies in 2004. Peter moved to New York City in 2005 where is currently active in the Jazz, Rock and Bluegrass scenes. Peter has played on various albums such as Casey Dienel’s “Wind Up Canary” and Heather & the Barbarians’ “Tell Me Tonight.” He is also a member of the Daniel Levin Quartet, Holus Bolus and Cat Show Snapshots.