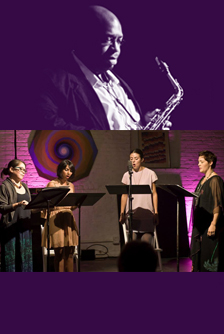 “It’s always very exciting when you come across a new name in the music, and especially someone with a fully formed, distinctive sound.” -BBC’s Jazz on 3

“Listening to these etudes should trigger a similar feeling of listening to a dog bark, a bird sing, or listening to someone speaking a foreign language. True communication goes beyond words.” –Darius Jones

Darius Jones’ The Oversoul Manual is presented at Roulette with a residency through the Jerome Foundation.

Critically-acclaimed alto saxophonist and composer Darius Jones manifests a bold visionary epic: a large scale, a capella sci-fi work, The Oversoul Manual, using a language from an alien world. This riveting song cycle creates music and art from syntax and speech patterns that are different from ours, expressing the hope and truth that real communication lies beyond the realm of words and the familiar. This work will be performed by the Elizabeth-Caroline Unit, a quartet for which Jones composed this collection of etudes. Comprised of vocalists who are each coming from a very different approach, this combination of singers creates the unique sounds that are a part of the sonic character of The Oversoul Manual. This work is a dramatic and deeply moving exposition of the birth, growth, spiritual journey, and return of Man’ish Boy, the central character in Jones’ ongoing epic. The Oversoul Manual is a blending of myth and autobiography in a startlingly original vision of the universe, expressing the power of music to create and transcend.

Darius Jones is an alto saxophonist and composer who joined the New York music community in 2005. Jones has collaborated with Gerald Cleaver’s Black Host, Oliver Lake Big Band, William Parker’s Essence of Ellington, Mara Rosenbloom Quartet, Trevor Dunn’s Proof Readers, James Carter, Fred Ho, Eric Revis, Elliott Sharp, Matthew Shipp, and many more. Nominated in 2013 for Alto Saxophonist of the Year, and for Up and Coming Artist of the Year two years in a row by the Jazz Journalists Association Jazz Awards, Jones made his recording debut as a bandleader in 2009 on AUM Fidelity with the Darius Jones Trios’ Man’ish Boy (A Raw & Beautiful Thing). With visual artist Randal Wilcox, Jones has developed the Man’ish Boy Epic, an ongoing Bildungsroman for the Twenty-First Century that folds Jones’ original, all-encompassing musical quest into a startling science fiction story.
dariusjonesmusic.com

Darius Jones’ residency is made possible in part by the Jerome Foundation.