“Solo Gig: Essential Curiosities in Musical Free Improvisation is the name of my book, which is ostensibly about improvised music performance. It’s also the name of this actual improvised performance, which is ostensibly about this book, and which is going to somehow involve the book. In fact, I have this deliberately vague plan to use bits, or aspects, of the book as out-of-context source material for some type of narrative element, as another component of the gig. Playing the book, maybe; or using the book to play the guitar. Using one solo gig to play another, so to speak.” 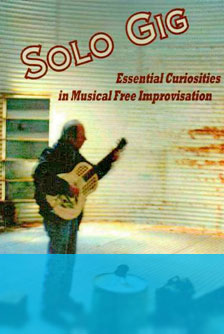 Davey Williams is generally acknowledged as one of the founders and preeminent exponents of American free-improvised guitar playing. Born in York, Alabama in 1952, he began playing guitar around age 12. During high school he developed a deep interest in blues, and following graduation found his first professional work in the blues band of Johnny Shines, and subsequently in the soul band and revue Salt and Pepper. During this time he began involvement in new jazz, avant-garde composition, electronic music, surrealism and free improvisation. In 1974, he formed with LaDonna Smith the improvisation ensemble (and independent record label) Trans Museq. He was active in the Rev. Fred Lane’s Debonairs and the Raudelunas ‘Pataphysical Revue.  By 1976 he had appeared on his first published recordings. He also led the Birmingham-based group OK, Nurse, and the avant-blues band Trains In Trouble. From the mid 1980s he was part of the downtown New York scene, playing in the band Curlew with George Cartwright and Tom Cora, and in many other settings.  He has worked with many contemporaries in new composition and free improvisation, including Anne LeBaron, Eugene Chadbourne, John Zorn, the Shaking Ray Levis, Jim Staley, Ikue Mori, Any Denio, Gustavo Matamorous, Col. Bruce Hampton and the London-based trio Say What!.

To date, he has appeared on many recordings, and has performed  nationwide and internationally in a wide variety of solo, ensemble and multi-media events.  Throughout this time he has published many articles on music, improvisation, and surrealism, and a cartoon book, Which Came First: The Fried Chicken or the Fried Egg?