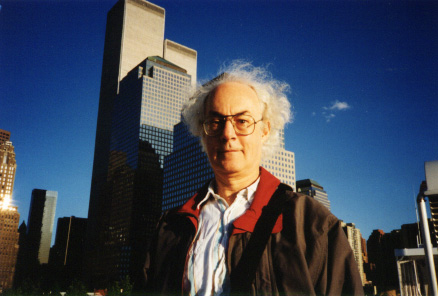 My Dear Siegfried,… A piece for vocalists and musicians which grew out of the recent discovery of letters between two writers born to different worlds at the end of the 19th Century. With Eric Barsness and Thomas Buckner, voices; Ralph Samuelson, shakuhachi.

From Forced Exposure: Sam Behrman and Siegfried Sassoon met in 1920, when Sam Behrman, then a young writer working at The New York Times, was sent to interview Sassoon at the start of the English poet’s postwar American lecture tour. In that tour Sassoon was billed as “England’s Soldier-Poet.” He had a reputation both as a war hero and an anti-war poet and peace activist. Many years later, each author wrote about this youthful meeting, which inaugurated a long-lasting friendship and a correspondence, mostly conducted via trans-Atlantic letters between England and America, which continued into the 1950s. This composition provides a performance environment in which musicians interact with texts by the two authors and with David Behrman’s music software designed to respond to the performers’ actions.

David Behrman has been active as a composer and artist since the 1960s – making sound and multimedia installations for gallery spaces as well as compositions for performance in concerts. My Dear Siegfried, Leapday Night, On the Other Ocean, Unforeseen Events, lnterspecies Smalltalk, Long Throw and Open Space with Brass are among Behrman’s works for soloists and small ensembles. In the 1970s, he collaborated with Robert Watts and Bob Diamond on the video and sound installation Cloud Music; in the 1980s, with George Lewis and Paul DeMarinis, he made installations for the DeCordova, Hudson River and La Villette museums. His most recent installations were Pen Light (2002) and View Finder (2006). –Bio as of 2019