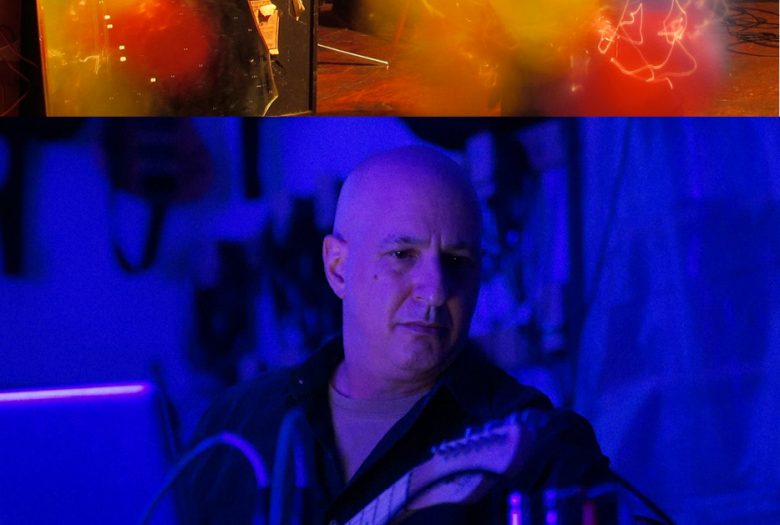 Tonight’s program has developed quite naturally out of the contrasting, yet highly complementary, organizational methods and performing forces employed by the composers, David First and Pat Spadine to realize their ultimately very like-minded goals. This will be an evening of immersive sonic cooperation and porous media interaction that will utilize the full extent of Roulette’s technical capabilities as well as the entirety of its physical space. Both groups will present self-contained works from their unique repertoires as well as premiere a collaboration by First and Spadine for their combined ensembles, created especially for the occasion.

David First’s musical career is filled with opposites and extremes. As a composer he is known for his dense, mesmerizing drone structures which he performs sitting trance-like without seeming to move a muscle. At other times, he can be found playing guitar with his psychedelic punk band, Notekillers, where he is a whirling blur of hyperactive energy. His ensemble, The Western Enisphere, is comprised of specially selected players trained in the exploration of First’s concepts of Gestural Improvisation — a hypno-acoustical mix of microtonal drones, poly-rhythmic ratios, AM radio transmissions, power animal invocations, and hallucinogenic visuals with the intention of causing a molecular transduction inside all those in attendance.
davidfirst.com

The Ashcan Orchestra is simultaneously the audio/visual work of composer P. Spadine, a large collection of toy, re-appropriated, and “real” instruments, and a revolving performance ensemble based in Bushwick, NY. Since 2007 the ensemble has been popping up in D.I.Y. style  and art house venues thoughout NYC and the eastern seaboard, employing everything from children’s handbells, prepared tape recorders, stacks of discarded televisions, homemade circuitry, colored lightbulbs, mirrors, to more widely accepted noisemakers to create new music in forms more familiar than the instrumentation would lead the listener to believe. This process from humble and understandable beginnings to grander and more complex ends, has been a vehicle to both celebrate and emulate the physics that bind the known universe.
ashcanorchestra.blogspot.com