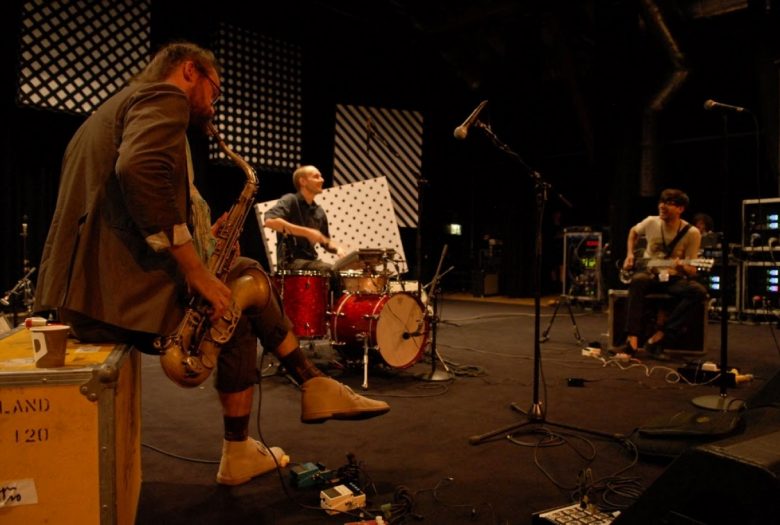 David Linton (born Newburgh NY 1956) is a Time based multiple media artist traveling the vectors of sound, subculture, and signal flow. He has been active in the downtown NYC experimental arts community for 30 years. Originally a percussionist, David has created sound, music, and something in between, for many collaborative dance, theater, & performance settings since his arrival in NY at the end of 1970’s. By the later 80’s – after a good deal of percussion work along side other musicians: Lee Ranaldo, Rhys Chatham, Glenn Branca, Elliott Sharp among others – he was equally known for his live wired solo electro-acoustic drumkit performances as well as his soundscore productions for the Wooster Group & choreographers Karole Armitage & Steven Petronio among many others. His 1986 solo Lp “Orchesography” was an unlikely collusion of street beats, early sampling tek, and theatrical post modernism. By the early 90’s he had retired from performing in the live electro-acoustic vein to concentrate on the vocabulary of entirely electronic music and the resultant paradigm shift in performance priorities this new ‘compressed’ format suggested. Throughout the 90’s Linton became a dedicated advocate for the expansion and appreciation of realtime performance in electronic media through the design and/or production of event/environments such as ‘SoundLab’ (1996) and eventually ‘UnityGain’ (1997-present). In the later 90’s David was a key participant in Meg Stuart/Damaged Goods multimedia improvisation project “Crash Landing”.
From 2001 Linton’s fascination with instantaneous collaborative audio visual communication among select units of electronic sound and visual artists assumed the form of a live experimental television Manhattan cable/webcast project – UGTV – Unitygain Television (2001-2004) – for which he was producer/director – and occasional performer. In 2004 David embarked upon his present course with the launch of his solo audio-visual project: the Bicameral Research Sound & Projection System –
With his “Bicameral Research Sound & Projection System” (2004) Linton aims to make vibrational wave induced perceptual energy states manifest by deploying interconnected measures of electric sound & pulsing light in live action with hand manipulated objects in physical (live camera) space.
He employs an integrated recursive audio & video feedback system of his own perversely simple design modulated by freehand intervention to deliver vigorous eye, ear, and – sometimes – body shaking realtime audio visual performances from which a kind of retro-tech animist ritual “medicine show” emerges where subject and object blur. Thematically David likes to consider that within the 20th Century 60 Hz alternating electrical current gradually came to function as a primary subliminal Prana in the mass bio-energetic body/culture of human life in North America…