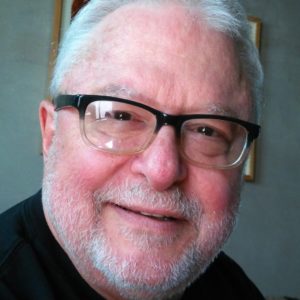 Roland’s Ghost: Performers and amplified graphic sculpture-score. David Means, digital horn and MIDI performance system In collaboration with Steve Goldstein, laptop sampling. Roland’s Ghost is a soldier’s tale of torture, betrayal and transformation, set in the Pyranees Mountains against a backdrop of ancient wisdom, classical literature and contemporary intrigue. On one level Roland’s Ghost is an attempt to cast a spirit of ‘l’histoire du soldat,’ a kind of universal soldier’s story, ranging from historical references to Charlemagne, to the poems of Wilfred Owen and E.A. Robinson, to the artist’s personal reflections on his experiences as an infantry soldier in Vietnam.

David Means was born the same day the sound barrier was broken. He studied architecture at the University of Illinois, attending the design workshops of R. Buckminster Fuller and participating in the first Musicircus of John Cage in 1967.

After compulsory military service he returned to Illinois where he pursued a DMA in composition studying with Ben Johnston, Herbert Brun and Salvatore Martirano. An active composer, performer and educator, he has created numerous graphic scores and interactive performance installations, which have been exhibited and performed throughout the US, Europe, Australia and Asia at venues such as Documenta IX (Germany), New Music America (Minneapolis, Houston, Hartford), Dance Theater Workshop (New York City) and the Xi An Conservatory of Music (China). Since 1995 he has emphasized live electronics performance utilizing collaboration, improvisation and invented notational systems. Since 1982 he has taught at Metropolitan State University in St. Paul, as an associate professor of music and intermedia art and producer of the Strange Attractors Festivals of Experimental Intermedia Art.