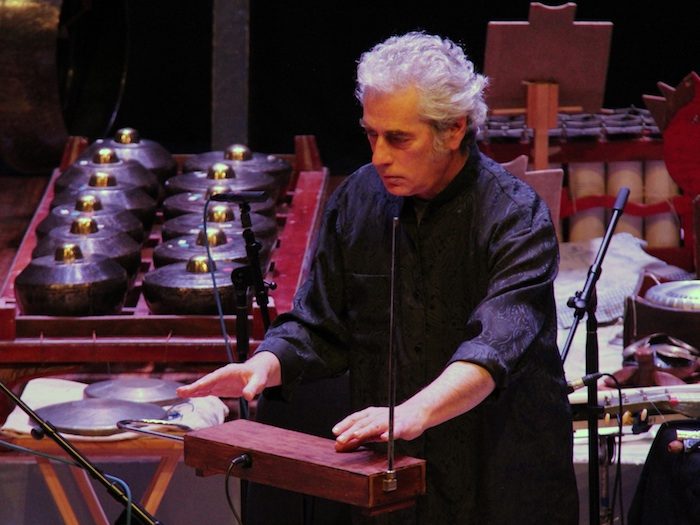 David Simons is a composer and performer specializing in percussion, Theremin, electronics, homemade instruments, and World Music. Recordings of his works include two CDs on Tzadik records, Fung Sha Noon (2009) and Prismatic Hearing (2005); three CDs for Gamelan Son of Lion including compositions Kebyar Leyak, Cool it Wayang and Naked We Stand; his string quartet Cipher on the NYFA Collection released on Innova Records; the opera The Birth of George (Tellus/Harvestworks) with Lisa Karrer; and on albums by God is My Co-Pilot, Stockhausen, Shelley Hirsch, Denman Maroney, Laura Andel, Music for Homemade Instruments, and many others. David’s work in music for theater and dance has brought him to Europe, Asia, Guantanamo, Honolulu, and Bali. He has been awarded a Rockefeller Bellagio residency, NYFA fellowships, commissions from American Composers Forum, Mary Flagler Cary, Meet the Composer; and travel grants from Artslink and Arts International for collaborations in Estonia and Indonesia. Simons’ composition Odentity for the Harry Partch instruments was premiered by Newband in 2007, and is featured on his newest Tzadik CD, FUNG SHA NOON. David is currently writing an opera influenced by the work of Marshall McLuhan. His writings on music and sound are published in Radiotexte (Semiotexte#16), EAR magazine, and Soundings. –Bio as of 2013