DEDALUS Ensemble – Made in USA 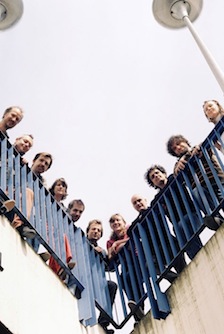 DEDALUS Ensemble – Made in USA

Since its inception in 1996, the DEDALUS Ensemble of Montpellier, France has been a leading purveyor of contemporary experimental music across the Atlantic. For its US debut, DEDALUS Ensemble has initiated a project which gives a selective overview of new music from NYC. With Made in USA, the ensemble will be working with an esteemed roster of New York-based experimental composers, including Travis Just, Devin Maxwell, Cat Lamb, Jason Brogan, Quentin Tolimieri, Jonathan Marmor, Craig Shepard, John Hastings, and Michael V. Waller. These exciting new compositions will be performed by Dedalus both in at Roulette, and also, jointly in Montpellier, France.

The project is made possible with support from French Ministry of Culture (DRAC), French Institute, Région Languedoc-Roussillon, French-American Fund for Contemporary Music (FACE).

Created in 1996, DEDALUS Ensemble is a contemporary experimental music ensemble based in Montpellier, France. Their repertoire gives a large place to flexible scores from across the United States and European New Music from the 1960’s to today. DEDALUS is a collective where every musician collaborate to orchestration and interpretation. DEDALUS is a leading ensemble in France and performs extensively in festivals and concert series across France and Europe. A noted champion of contemporary American experimental music, the Ensemble has premiered works by Tom Johnson, Christian Wolff, Alvin Lucier, Phill Niblock, Frederic Rzewski, James Tenney before French audiences.
dedalus.ensemble.free.fr/dedalus.html