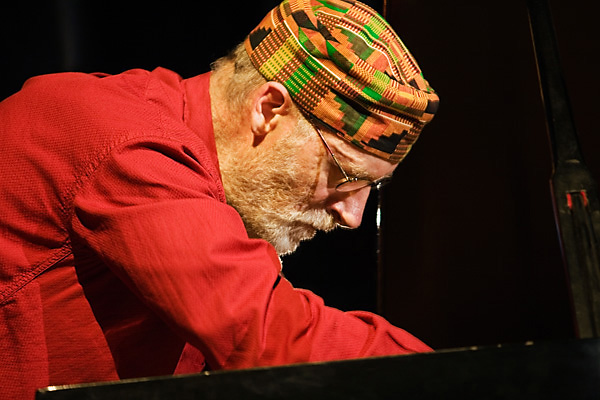 Composer and hyperpianist Denman Maroney presents works of the seventies, eighties, nineties and aughties (including some world and New York premieres) with his brand new group consisting of himself (hyperpiano), Ned Rothenberg (reeds), Reuben Radding (bass), and Michael Sarin (drums). Maroney’s music is inspired by the sound of crickets and power tools (among other things) and by the music of John Cage, Ornette Coleman, Henry Cowell, Charles Ives, Olivier Messiaen, Thelonius Monk, Conlon Nancarrow and Karlheinz Stockhausen, among others. Maroney has made nineteen commercial recordings with everyone from Leroy Jenkins to Mark Dresser to Ned Rothenberg. He has received grants from: the NEA, ASCAP, New York State Council on the Arts, New York Foundation for the Arts, the Mary Flagler Cary Charitable Trust, the Jerome Robbins Foundation, and Meet the Composer on several occasions. Cadence Magazine describes him as one of the most unique pianists to emerge in the ’90s… Utilizing an extreme prepared piano technique and a unique rhythmic sensibility, both instrumentally and compositionally, he has become one of the most intriguing composer/performers around.” Check out: www.pipeline.com/~denman