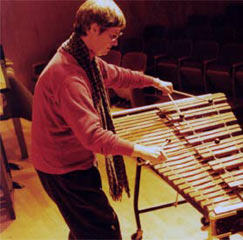 Department of Hearts at Roulette 2007

The Department of Hearts (Airi Yoshioka and Sylvia Smith) performs a retrospective concert of the violin music of Stuart Saunders Smith, a composer associated with rhythmically complex, finely wrought music. Our program features Hearts, a seven-movement work for unaccompanied violin, commissioned by Airi Yoshioka. Each movement creates a poetic expression of the ambivalent, deep regions of the heart. Hearts combines subtle theatrical elements with a hyper-expressive use of the violin and voice.

Violinist Airi Yoshioka has performed throughout North America, Europe, and Asia as a recitalist, soloist and chamber musician. An enthusiastic performer of new music, she was one of the original members and concertmasters of the New Juilliard Ensemble and has performed annually in Juilliard’s FOCUS! Festival and is currently a member of Continuum, ModernWorks!, Son Sonora, and Azure Ensemble. A graduate of Yale University and the Juilliard School, she is currently Assistant Professor of Music at the University of Maryland Baltimore County.

Dr. Yoshioka has been actively commissioning new works for solo violin. Hearts, a highly virtuosic solo in seven movements by Stuart Saunders Smith, was written for her. In recent years she has been interested in exploring the different ways in which violin can be combined with other mediums and sounds while retaining the independent quality of the instrument. “The Violin Music of Stuart Saunders Smith” is a program that pursues this idea through the interactions of violin and voice and violin with percussion.

Sylvia Smith is the founder, owner and editor of Smith Publications/Sonic Art Editions, publishers of serious American art music. She is extremely rigorous in her selection of music and therefore her publishing house is looked to as a leading source of new American music. The recipient of six Paul Revere Awards for graphic excellence, her publications are thought of as particularly handsome editions. Her scholarship includes publishing several articles on music notation, and curating many concerts of John Cage’s music.

As a percussionist, Sylvia Smith is active as a new music specialist, performing at Merkin Hall in New York, and with the Merce Cunningham Dance Company, and has received repeated invitations to appear at the Percussive Arts Society International Convention. She tours North America with the Sylvia Smith Percussion Duo, specializing in percussion with spoken text and percussion theater. Her performances are recorded on oodiscs and 11 West Records. The recipient of numerous honors, Dr. Smith was awarded the American Music Center Letter of Distinction in 1988.

Stuart Saunders Smith (born 1948 in Portland, Maine, USA) is a confessional composer who focuses on revealing in his music the most personal aspects of his life, in the belief that the revelations of the particular speak to the universal.

Stuart Saunders Smith’s music is performed regularly on an international basis. He has been awarded grants from the National Endowment for the Arts, the Maryland State Arts Council, and the Pittsburgh Film Forum, as well as the Hartt College of Music Distinguished Alumni Award, and a Percussive Arts Society Citation for Distinguished Editorship.

Stuart Saunders Smith has been on the faculty of the Atlantic Center for the Arts, the Darmstadt Musikinstitut (Germany), and Percussion Workshop Poland. Residencies include University of California -San Diego, Yale University, Documenta 1992 (Kassel, Germany), and the University of Gothenberg (Sweden).