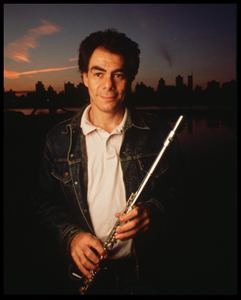 “A flutist whose technical resources and imagination seem limitless.” Allan Kozinn, New York Times
Robert Dick’s contributions to the development of the flute and its music are profound. With equally deep roots in classical music old and new, free improvisation and new jazz, he is known as the flute’s visionary. Dick plays the flute like it’s a human powered synthesizer. Listening to him play solo has been likened to the experience of hearing a full orchestra.

New York-based multidisciplinary artist Joshue Ott creates cinematic visual improvisations, often performed live and projected in large scale. Working from hand-drawn forms which he then manipulates with superDraw, a software instrument of his own design, Ott composes evolving images that reside somewhere between minimalism, psychedelia, and Cagean chance. He performs frequently with musicians, sympathetically translating sound to vision to yield immersive multi sensory experiences that are at once immediate and synergistic.

Billy Gomberg (b 1979, Chicago) is a musician and video artist living in Brooklyn NY. His studio practice incorporates analog synthesis, digital treatments, acoustic recordings and custom programming that gives rise to electronic sound caught gazing at its own physicality, acoustics in love with their own abstraction.