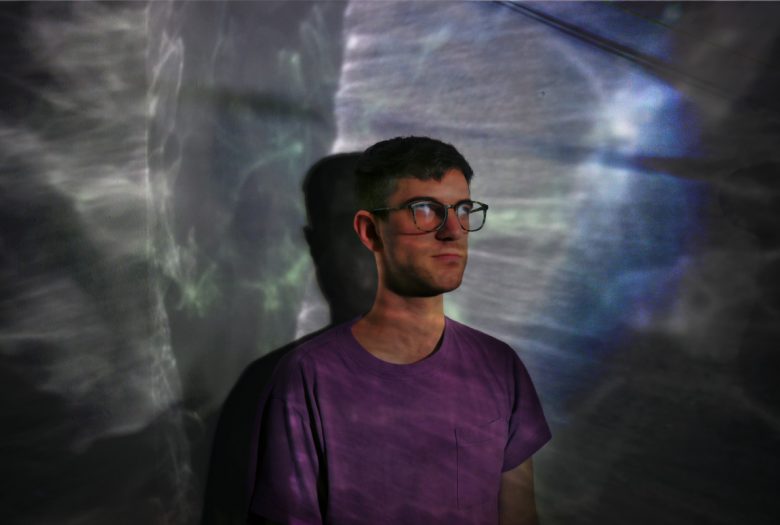 An eclectic evening blending acoustic and electronic performances both improvised and composed. Sweet Combustion (Jennifer Choi, Ikue Mori, Marco Cappelli, and Rubin Kodheli) start the evening with a surreal combustion of sounds and atmospheric melodies, followed by “residuals” – a lush synthetic work for quadraphonic speakers by Doron Sadja. Topping off the evening is an explosive improvisation by longtime collaborators Jim Staley (trombone) and Ikue Mori (electronics).

Doron Sadja is a sound and visual artist investigating how sound, light, movement, and the body can react to and augment the architectural, atmospheric, and psychological space of the performance environment. Current collaborations include MIRRORGATE (a duo with Mario Diaz de Leon fusing metal/new age/doom with a smoke and mirrors light show), ALFI & WALDI (a multimedia performance and installation duo with Alfredo Marin), and Perfect Lives (a multimedia duo with Severiano Martinez). Previous projects include Sadjeljko (duo with Zeljko McMullen) and Symbol. Sadja has published multiple solo and collaborative works on 12k, Shinkoyo, and Atak records. In 2003 Doron founded Shinkoyo : an experimental music record label/art collective currently based in New York, Oakland, and Baltimore. From 2006 to 2010 Doron founded and ran the Paris London West Nile performance/gallery space in Brooklyn.

Trombonist, composer, and founder of Roulette Jim Staley has been shaking up the downtown experimental music scene for over 30 years. Working primarily with improvisation, crossing genres freely between post-modern classical music and avant-garde jazz, Staley has collaborated for many years with other highly experienced improvisers, both dancers and musicians. Tonight Jim will be joined by special guests.

Four adventurous collaborators merge musicalities in an evening of conceptual, improvised, and chance music resulting in a surreal and powerful combustion of sounds and atmospheric melodies.

Jennifer Choi – Hailed by Time Out New York as “one of New York’s most reliably adventurous performers”, violinist Jennifer Choi has charted a career that breaks through the conventional boundaries of solo violin, chamber music, and the art of creative improvisation. A prominent chamber musician, Jennifer won Grand Prize at the 1996 Fischoff and Coleman chamber music competitions. Since then, she has performed for theChamber Music Society of Lincoln Center, Ravinia Festival, Barge Music, and Caramoor Music, among others. Ms. Choi is regularly sighted in solo performances of works that stretch the limits of violin playing often calling for extended techniques, improvisation, and the use of electronics. In 2006 she received a grant from the New York State Music Fund for the premiere and performances of ‘Holding Fast’ for violin and video written for her by Randall Woolf. She also gave the world premiere of John Zorn’s solo violin work, Goetia at the Guggenheim Museum, and Wadada Leo Smith’s Afrikana concerto for violin. She can be heard on over a dozen albums for TZADIK record label. Most recently Ms. Choi served as Concertmaster of the National Touring production of South Pacific.

Rubin Kodheli, Cello Rubin Kodheli was born and raised in Tirane, Albania. At the age of 7 Rubin began his music studies on the cello. He quickly gained attention as a prodigious talent. He continued his education in Belgium and Germany, eventually landing in New York to attend the Juilliard School of Music studying with Fred Sherry. During his studies at Juilliard he became more and more interested in collaborations between dance, theater and music. It was at this time that he first began his exploration of composition. Most recently, Kodheli composed additional music for the feature filmPrecious, directed by Lee Daniels. His piece Desert Man was featured in the Documentary film Third Wave based on the 2004 Tsunami which decimated Sri Lanka. Kodheli also composed the score for the dance film Becoming, winner of the Best Experimental Prize at the Miami Short Film Festival. On television, his music has been featured in the HBO seriesTrue Blood. As a performer and soloist Mr.Kodheli has collaborated with Courtney Love,Henry Threadgill, Philip Glass.

Ikue Mori moved from her native city of Tokyo to New York in 1977. She started playing drums and soon formed the seminal NO WAVE band DNA, with fellow noise pioneers Arto Lindsay and Tim Wright. DNA enjoyed legendary cult status, while creating a new brand of radical rhythms and dissonant sounds; forever altering the face of rock music. In the mid 80’s Ikue started in employ drum machines in the unlikely context of improvised music. While limited to the standard technology provided by the drum machine, she has never the less forged her own highly sensitive signature style. “¨Through out in 90’s She has subsequently collaborated with numerous improvisors throughout the US, Europe, and Asia, while continuing to produce and record her own music.”¨1998, She was invited to perform with Ensemble Modern as the soloist along with Zeena Parkins, and composer Fred Frith, also “One hundred Aspects of the Moon” commissioned by Roulette/Mary Flagler Cary Charitable Trust.”¨Ikue won the Distinctive Award for Prix Ars Electronics Digital Music category in 99. In 2000 Ikue started using the laptop computer to expand on her already signature sound, thus broadening her scope of musical expression. 2000 commissioned by the KITCHEN ensemble, wrote and premired the piece “Aphorism” “¨also awarded Civitella Ranieri Foundation Fellowship. “¨2003 commissioned by RELACHE Ensemble to write a piece for film In the Street and premired in Philadelphia. Started working with visual played by the music since 2004. In 2005 Awarded Alphert/Ucross Residency.”¨Recived the grant from Foundation for Contemporary Arts in 2006. Tate Modern commissioned the live sound track for Maya Deren’s silent films and premired in 2007.”¨In 2008 Celebrated 30th music year, presented 5 on-going projects at Japan Society in NYC. “¨Current working groups include MEPHISTA with Sylvie Courvoisier and Susie Ibarra, projects with Kim Gordon, duo project PHANTOM ORCHARD with Zeena Parkins, various projects with John Zorn. and John Zorn’s Electric MBio

Marco Cappelli, Guitar. After completing many years of demanding music studies (first at Conservatorio di S. Cecilia in Rome and then in the Konzert-Klasse at the Musik Akademie in Basel with Oscar Ghiglia), Marco Cappelli has lead an extraordinary artistic path, becoming familiar both with rigorous written music as well with free improvisation languages.