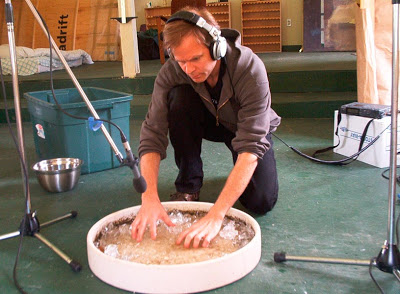 A layering of recordings of 200 cups of coffee made in a dyingespresso machine which finally exploded after leaving this testimony. Ihad set up a microphone and recorder when it first started its strange shrieking, thinking that it had not long to live. For the next 100 days (2 cups a day) I kept pressing the record button every morning to accumulate this Kaffeegeist. I am most interested in morphogenesis, the moment of transformation, where in one instant I recognize the sources of these sounds, and in the next instant they become somethingnew to all this world.

The conception for this series began in the summer of 2001 at the Centre de Creation Musicale Iannis Xenakis (CCMIX) in Paris, where Xenakis’ exploration of the concept of the “unimaginable” sparked the idea for creating a fully spatialized work in which the fundamental
compositional trajectories and imperatives would be directed by the construction of shapes and vectors in space. The nature of the sound composition would develop from the dictates of a kind of sonic holography, and the temporal progression would follow a physical model akin to the construction of a house. I extended my use of multiplications of sound sources to expose unheard images and textures, and each of these pieces employs dozens and sometimes hundreds of layered recordings. It is a music made to be seen in the mind’s eye, and felt in the ear. 104, 105 and 106 have been constructed with the support of Harvestworks’ Artist in Residence Program.

Douglas Henderson has been composing, performing and making installations in New York City and internationally for more than 20 years with a variety of collaborators: Jude Tallichet, Guy Yarden, Zeena Parkins, David Henderson and Kristin Lucas, to mention a few. He is currently focused on sound installations, both sound-producing objects and multi-channel immersive sound sculptures. He has shown in galleries from New York (including vertexList, Art in General, G.A.S. and the Whitney Museum) to Muu Gallery in Helsinki, to Seoul, South Korea (SICMF). He has composed electroacoustic music for dozens of dance works by choreographers such as Jeremy Nelson, Mia Lawrence, Jennifer Monson, Wildadance Copenhagen and Phoenix Dance Theatre UK, and has toured extensively in the U.S. and Europe performing original work. He holds a Ph.D. in music composition from Princeton University, and shares in 2 gold records and a Mercury Prize for his mixing and mastering work. He recently chaired the Sonic Arts Department at the School of the Museum of Fine Arts Boston, received a 2005 Rockefeller Foundation MAP Award, a 2006 Harvestworks A.i.R. and a 2007 DAAD residency in Berlin. For more information, visit www.DouglasHenderson.org.