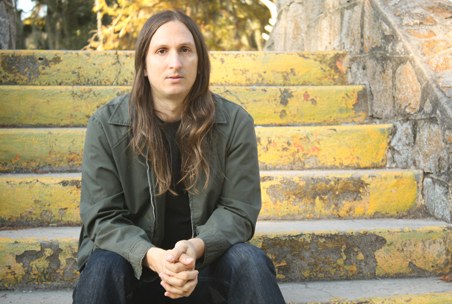 Duane Pitre (originally from New Orleans) is a Brooklyn-based, avant-garde composer, performer, and improviser. His current works explore both chaos and discipline-and the relationship that exists between the two.

Ensemble Drones is a rule-based, long-tone composition by Duane Pitre. The work’s score calls for 12 or more performers from the Strings, Winds, and Brass categories along with bowed electric guitar (played by the composer) and harmonium. The composition requires its performers to make minor decisions based on its score — which provides a structure consisting of set playing methods, technique restrictions, a fixed tonic, fixed pitch classes, and spontaneous conduction — resulting in slow-shifting permutations of a single chord over a long duration. Essentially, the score enables all the performers to approach this planned improvisation in the same manner, thus creating a group of musicians that thinks and plays as a cohesive unit. The result is a piece of music that is focused, yet fluid, minimal, yet dense — yielding a sound that is not unlike slow-motion chamber music. The composition is an exercise in discipline and freedom, in the refinement of music, and in communal focus. The piece involves a temporary community of musicians with a central goal stripped of self: to become one.

Pitre’s December 4th performance of Ensemble Drones at Roulette will feature a special ensemble consisting of 20+ performers that will partially encompass the audience.