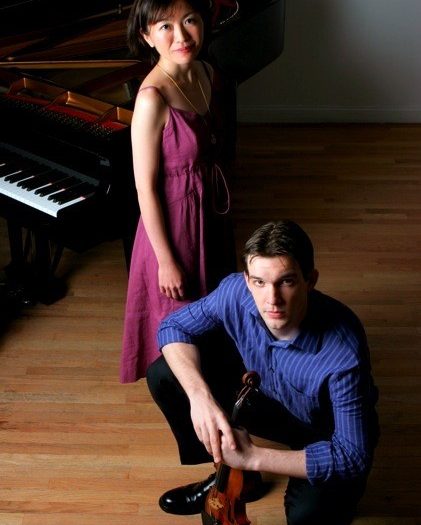 Comprised of pianist Rieko Aizawa and violinist Jesse Mills, Duo Prism is a dynamic ensemble committed to the full spectrum of works composed for this instrumentation. The metaphor of a three-sided prism represents the perfectly balanced relationship which these two artists together make with the composers of the works that they present.

In May of 2006, Duo Prism won 1st Prize at the Gaetano Zinetti International Chamber Music Competition in Verona, Italy. Since its inception in 2005, Duo Prism has performed at Universities, Concert Halls, and Festivals throughout the United States. Based in New York City, the duo enjoys opportunities to work with contemporary composers in addition to their exploration of the vast traditional repertoire. They are in the process of performing the complete sonatas by Beethoven, and they aim to commission new works in the upcoming season.

Both Aizawa and Mills are graduates of the Juilliard School. Aizawa also studied at The Curtis Institute in Philadelphia, where she was the last pupil of Miecyslaw Horszowski. A native of Japan, Ms. Aizawa made her United States debut in 1988 with the New York String Orchestra, conducted by Alexander Schneider, at the Kennedy Center and at Carnegie Hall.

Mills earned a Grammy nomination for his work on a CD of Arnold Schoenberg’s music, released by NAXOS in 2005. He is known as a pioneer of contemporary works, a renowned improvisational artist, as well as a composer. Mills recently made his concerto debut at Chicago’s Ravinia Festival, and he also recorded a disc on the Verve label with jazz pianist Makoto Ozone.
Duo Prism has a passion for understanding the voice of every composer; they seek to illuminate the music as well as their own joy recreating it.