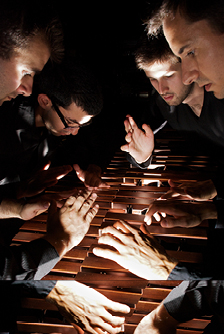 Iktus Percussion, with guest artists Denise Filion and Julia Den Boer, explore the interaction of both electronic, acoustic, and instrumental theater of the Darmstadt era via a constellation of works for piano, percussion, and electronics. In his 1960 Kontakte, Karlheinz Stockhausen takes the analog electronic world as his primary palette, spreading colors on an acoustic canvas of piano and percussion sound. Luigi Nono‘s 1976 Sofferte Onde Serene for piano and electronics turns inward, focusing less on exploration of sound and more on cultivation of dialogue. Nono involves us in an intimate, and at times beguiling, conversation between piano and the pre-recorded improvisations of Maurizio Pollini. Finally, Mauricio Kagel challenges conventional western musical tradition in his 1977 work, Dressur. Scored for over 50 wooden instruments and non-instruments, Kagel combines the visual and auditory to draw his audience into a whirlwind of absurdist and unorthodox musical theater. This piece may (or may not) contain partial nudity.

Based in New York City, Iktus Percussion is an ambitious, dynamic young ensemble committed to expanding the boundaries of the percussion genre. Iktus is a collective-based operation, featuring an array of industrious and multi-talented percussionists lead by Chris Graham. As a group with strong ties to the local artistic community, Iktus is dedicated to collaboration with emerging artists, having commissioned over fifty new works for percussion from such composers as Angélica Negrón, Aaron Siegel, Lisa R. Coons, Jenny Olivia Johnson, Stefan Weisman, and Billy Martin (of Medeski, Martin and Wood), among others.
iktuspercussion.com

Originally from Washington State, Denise Fillion is a frequent soloist and collaborator in the New York City area. She has a special affinity for new music, and has worked with several living composers, including Tristan Murail, Frederic Rzewski, and George Crumb. Additionally, as a runner-up in the David Lang International Piano Competition, she recently premiered a new work written for the occasion by Lang at Le Poisson Rouge in New York. Denise has also been a guest with several ensembles dedicated to new music including Mantra Percussion, the Argento Chamber Ensemble, and Iktus Percussion Ensemble.

French-American pianist Julia Den Boer is based in New York where she enjoys a versatile career as a soloist, chamber musician and pedagogue. A strong advocate for new music, Julia is a founding member of Sinopia, a two percussion and piano ensemble dedicated to the commission of new works, and performs regularly in North America and Europe. She is a recipient of the Solti Foundation award and was awarded the Prix Mention Speciale Maurice Ohana at the 2012 International Orleans Competition. Recent performances include the International Computer Music Conference, the Klangspuren Festival in Austria, Matrix 11 at the SWR Studio in Freiburg, Live@CIRMMT Series in Montreal, Poets Out Loud at Lincoln Center, the Five College New Music Festival and Manifeste at IRCAM.
juliadenboer.com

A showcase of highly talented and adventurous performers, composers, and collaborative artists, Ear Heart Music is a modern chamber music series for modern ears. Operating at the Tank in Manhattan for the past three years, founder and director Amelia Lukas has “piloted impressive events on a shoestring budget. Roulette offers greater resources, and Ms. Lukas is taking advantage in an ambitious season filled with premieres and cross-disciplinary collaborations” (The New York Times).

According to Time Out New York, Ear Heart Music “has become a staple in the New York new music soundscape.” Its thoughtfully designed programs highlighting recent masterworks stimulate creative thought and instill new avenues of perspective in the listener. The consistent level of intelligent and inspiring music-making resonates in the mind and body. Shows include electronic processing, performance art, visual art, film, and dance, providing deeper context for the music. Unique artist pairings, diverse programming, and the integral incorporation new work all contribute to Ear Heart Music playing a major role in reshaping the chamber music landscape for the 21st century.
earheartmusic.org
facebook.com/pages/Ear-Heart-Music/116316791738457