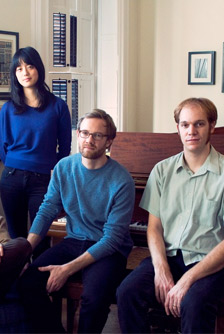 In a golden age of new chamber music, Ear Heart Music is a trusted source for post-genre creative collaboration. The three year old series is now approaching its first major milestone with a relocation to the seminal venue Roulette for the 2012-13 season. This thrilling upgrade is promising on both the small and large scale, expanding the scope of possibility for chamber music in Brooklyn. Collaborative multidisciplinary productions make up the bulk of the series. Echoing the emergence of intimate operatic productions as a mainstay in our scene, Ear Heart Music will present two world premieres of chamber opera this year.

As values shift and global inspiration combines with local innovation and craftsmanship, Ear Heart Music sits at the crux of this movement. By providing carefully curated chamber music of the highest quality in regular, small batches, Ear Heart Music showcases the best of new music while staying fresh and relevant.

Opening Party: Ear Heart Music meets Artisanal Brooklyn
This opening night celebration features a stellar line-up of Ear Heart Music talent. Performers include James Moore and Andie Springer playing folk-inspired new string music, On Structure creating sound and movement based performance art, and Build rocking their unique blend of minimalist, fiddle-heavy indie-classical to film landscapes. A variety of artisanal food from Brooklyn will be on offer during the party. A free raffle for ticket holders will result in giveaways of I Care If You Listen tote bags filled with artisanal goodies and crafts. Other surprises in store!

Based in Brooklyn, NY, James Moore (guitar/banjo) and Andie Springer (violin) perform a strange and beautiful mix of acoustic repertoire, drawing from their experiences in the classical, avant-garde, folk, and improvised music traditions, as well as influences from theater and visual art. The duo formed while on tour with the production of Richard Maxwell’s Neutral Hero and has performed around the world, including venues in Germany, Austria, France, Canada, and the US. Moore is a versatile guitarist performing on a wide variety of acoustic and electric guitars, banjos, and home-made instruments. He is a founding member of the electric guitar quartet Dither, and has performed with Bang on a Can, Alarm Will Sound, Clogs, and members of Wilco and The National. Springer is a violinist and a founder and co-director of new music ensembles TRANSIT and Redshift. She is also a member of Steve Griesgraber’s electric/chamber/improv band Redhooker, Angelica Negron’s ambient and childlike Arturo en el Barco, and Lainie Fefferman’s folk-inspired Phthia. Springer has had the pleasure of performing with Victoire, Ensemble de Sade, Anti-Social Music, the Wordless Music Orchestra, the Argento Ensemble, and American Opera Projects.
www.jamesmooreguitar.com/jamesandie.html

On Structure is a sound-centric performance duo featuring composer-performers Jessie Marino (cello) and Natacha Diels (flute), both members of Pamplemousse. The New York based ensemble uses improvised and composed sounds – and the fluctuation of these sounds – to brew transferable art pieces which may ravage the realms of the performer, audience or space itself. Uncovering the hidden motions of sound, freeing compositions from the fluorescence of the concert expectation. Topsy-turvy. Use of lasers, wigs, electronics, cellos and flutes; repurposing life experiences for music glitches and muscle twitches. Eclipse boundaries of the stage.
www.onstructure.com

“The surreal wonderland Build leads you through is endlessly fascinating and often gorgeous.” (Seattle Sound Magazine) Build is a Brooklyn-based indie-classical band consisting of Matt McBane, violin/compositions; Andrea Lee, cello; Michael Cassedy, piano; Ben Campbell, bass; and Adam D. Gold, drums. Both in its make-up and music, Build is fundamentally a hybrid group. Since forming in December 2006, it has developed a body of work and a performance style that draw on (to name few) minimalist chamber music, instrumental rock, modal jazz, American fiddle music, experimentalism, and film music, reflecting Matt’s interests as a composer and the backgrounds of the band members. Time Out New York described Build as a “quintet that straddles the increasingly permeable line between chamber music and instrumental rock.” buildbuildbuild.com

“Amelia Lukas’ innovative Ear Heart Music series has become a staple in the New York new music soundscape.” (Time Out NY) A showcase of highly talented and adventurous performers, composers, and collaborative artists, this is a modern chamber music series for modern ears. Thoughtfully designed programs featuring new and recent masterworks stimulate creative and original thought, instilling new avenues of perspective in the listener. Our intelligent and inspiring music-making resonates in the mind and body, nurturing our audience. By facilitating an open dialogue between listeners, artists, and composers, we provide a deeper context for our work. Shows often include additional artistic elements such as electronic processing, performance art, film, and dance. Unique artist pairings, diverse programming, and the integral incorporation of the new all contribute to Ear Heart Music playing a major role in reshaping the chamber music landscape for the 21st century.

“a fine balance of virtuosity and poetry” – The New York Times
“a buoyancy of spirit that comes out in the flute, a just beautiful sound” – The Boston Globe

An accomplished and adventurous flutist, Amelia’s recent projects include performances at Carnegie’s Zankel and Weill Halls, the Stone, Bargemusic, Le Poisson Rouge, the Norfolk Chamber Music Festival, the Orford Sound Art Festival, and premieres of works by Columbia University Composers at Lincoln Center. Amelia has appeared with such orchestras as the London Sinfonietta and the Boston Symphony Orchestra. In addition to producing chamber music concerts throughout New York City, she is a Promotion Associate for music publisher G. Schirmer, representing their chamber and dance music catalogues. Amelia holds a Master’s degree in Contemporary Flute Performance from the Manhattan School of Music, and a Bachelor’s degree from the Royal Academy of Music in London, England where she won three prizes for musical excellence.