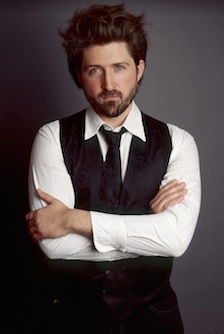 This performance offers the US premiere of Benton Roark’s watershed song cycle, Songs from the Rainshadow’s Edge (Redshift Records CD release). Described as a “dark and interior vision” (Georgia Straight, Vancouver), this five-part work is a lush and hauntingly poetic journey across the threshold of psychic rupture and back again. A multimedia event, this evening also features the premiere of a film by Austin-based artist-filmmaker Jeanne Stern (winner of the Student Academy Award Gold Prize for Documentary, and the CINE Gold Eagle Prize) created to complement the piece.

Songs from the Rainshadow’s Edge is a delicate and evocative melding of poetry and instrumental timbre that creates a shimmering world full of questions and bittersweet nostalgia. Exploring the psychological phenomenon of depersonalization – or a loss of Self – from a first-hand perspective, the poetic impetus stems from using the rainshadow (occurring in the northwest, where the shadow is in fact where the sun is, and rain the norm) as a metaphor for relativism in perception of Self and the world. The narrative arc of the music and text leads the listener through diverse perspectives on the subject from existentialist, Buddhist, and Jungian philosophies. The unusual instrumentation of soprano, flute, viola, bass, electric guitar, percussion, and narrator provided by Arkora along with Stern’s original animation add to the surreal impact of the piece.

Toronto-based composer Benton Roark’s music has been stylistically described as “ardent and soaring” (The National Post), “a dark and interior vision” (The Georgia Straight), and “emotionally rich” (NOW Magazine). His work has been commissioned at home and abroad by companies and ensembles such as Tapestry Opera, the Bozzini Quartet, retheatre, the Victoria Guitar Trio, and the Erasmus Foundation. Roark has also enjoyed critical acclaim as a performer of his own music as a bandleader and solo artist (“a crafty folk experimentalist,” Creative Loafing, Atlanta). Over the past few years Roark has worked increasingly in the experimental music theatre realm with projects such as Shadow Catch (“an evocative score,” The Bulletin),Songs from the Rainshadow’s Edge (“a dream-like state,” Musetta Stone), and Tap:Ex Revolutions (“a fluid, riveting experience” Schmopera). Current projects include work with Toronto’s Tapestry Opera, Vancouver’s Fugue Theatre, and Chicago’s Striding Lion Performance Group. Roark’s work can be heard on a number of recordings, including the Bozzini Quartet’s À chacun sa miniature, Mark Takeshi McGregor’s Sins and Fantasies, and three records of original work with his band Rollaway (“dirty-southern-gothic-rock-country-folk,” Discorder Magazine). Hailing originally from Atlanta, Roark holds degrees from Oberlin College and Conservatory and the University of British Columbia, and he has been a resident artist at the Banff Centre for the Arts, The Atlantic Center for the Arts, and the American Conservatory at Fontainebleau where he was co-recipient of the Tournon Branley Prize for collaborative work in architecture and music. A tireless arts advocate, Roark has held directorships with non-profits such as Vancouver Pro Musica and Redshift Music Society, and he is currently Co-Artistic Director of Arkora Music. (www.bentonroark.com)

Jeanne Stern uses animation, paper puppetry, and dioramas to create surreal environments and experimental narratives. Her work has screened internationally at venues including SXSW, the Smithsonian, the Athens Video Art Festival, The Contemporary Austin, the Werk-Raum Gallery in Berlin, the Kunst en Complex in Rotterdam, and Heather Henson’s touring film festival Handmade Puppet Dreams. Stern has completed artist residencies at Elsewhere (a former antique shop in North Carolina), and at the Atlantic Center for the Arts. She has drawn animation for several documentary films, including Ruth Fertig’s “Yizkor,” winner of the Student Academy Awards Gold Medal. Stern has taught courses in animation for the University of Texas at Austin in Portugal, and at the Austin School of Film. Originally from Boston Massachusetts, she now lives and works in Austin TX.  She received her BA in Studio Art from Connecticut College, and her MFA in film from the University of Texas. (www.jeannestern.com)

Now in the middle of their inaugural season, Arkora (www.arkoramusic.com) is a new music collective dedicated to contemporary vocal chamber music in its many forms. The group debuted in July of 2014 at the Sound Symposium Festival in Newfoundland and continues with a release of Benton Roark’s Songs from the Rainshadow’s Edge on Redshift Records, performances at Roulette in Brooklyn (presented by Ear Heart Music) and Studio 16 in Vancouver (presented by Fugue Theatre), and cross-disciplinary collaborations with artists such as Austin-based film-maker Jeanne Stern. This array of projects aptly reflects the collective’s multi-pronged mission, which is defined by collaboration, commissioning, recording, and innovation in concert production. As an ensemble, Arkora is made up of a rotating cast of affiliate artists from all over North America fluent in genres diverse as early music, indie rock, contemporary chamber, and black box opera. The collective is spearheaded by composer-conductor-soprano Kathleen Allan (www.kathleenallan.com) and composer-producer-writer Benton Roark (www.bentonroark.com).

Duo Scorpio is a New York City based harp duo comprised of Katie Andrews and Kristi Shade on a mission to expand the duo harp repertoire by commissioning new works and exploring existing pieces. Duo Scorpio was awarded an American Harp Society Grant in 2011, which they used to commission Robert Paterson. His work, Scorpion Tales, was premiered at the AHS National Conference in New York City on July 2, 2012. Duo Scorpio was the recipient of two additional AHS Grants (2013, 2014) and a Classical Commissioning Grant from Chamber Music America (2013).  Through these generous grants, the duo commissioned pieces from Nico Muhly and Andy Akiho.  Both pieces, Fast Dances (Muhly) and Two Bridges (Akiho), were premiered by Duo Scorpio at the World Harp Congress in Sydney, Australia on July 24, 2014. Duo Scorpio’s debut album, Scorpion Tales, (on the American Modern Recordings Label) was on the ballot nomination for the 2013 Grammy® awards. Coincidentally, Katie and Kristi were both born on November 5, 1982, making them both Scorpios. (www.duoscorpio.com)

Ear Heart Music “has become a staple in the New York new music soundscape.” (Time Out NY) Since September 2009, Ear Heart Music has produced over 80 unique concerts with over 60 world premieres. Its thoughtfully designed programs highlighting recent masterworks stimulate creative thought and instill new avenues of perspective in the listener. The consistent level of intelligent and inspiring music-making resonates in the mind and body. Shows include electronic processing, performance art, visual art, film, and dance, providing deeper context for the music. Unique artist pairings, diverse programming, and the integral incorporation of new work all contribute to Ear Heart Music playing a major role in reshaping the chamber music landscape for the 21st century.