[Ear Heart Music Presents] Ensemble Sospeso and Moto Perpetuo: Those Who Do Not Move 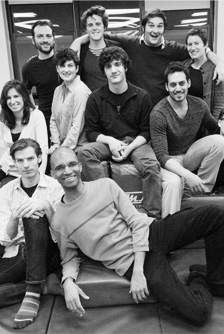 [Ear Heart Music Presents] Ensemble Sospeso and Moto Perpetuo: Those Who Do Not Move

These two impressive organizations team up for the world premiere of Those Who Do Not Move for large ensemble of speaking musicians, live electronics, and dancers by the boundary-pushing Oberlin composer Lewis Nielson. Nielson’s music features minute, transcendent beauty within grandiose and complex structures and thematic material, often employing a political bent. Those Who Do Not Move explores crowd formation types, actions, and dispersal as described by Elias Canetti in his masterwork Masse und Macht (Crowds and Power). The piece draws on the poetry of Paul Celan and works around themes of identity loss, lust for destruction, and the moment of eruption. In the words of the composer, the work exists “as an open question, kinetic in form…[it] is not meant to dazzle. It is meant to inform through the multi-valent questioning process adopted from Canetti. Nothing in this world lacks intention.” Miro Magloire and his New Chamber Ballet collaborate.

Mark André’s chamber piece da presents another perspective on the composer’s fascination with the production of sound. A protégé of Lachenmann and Grisey, André’s work starkly contrasts with the electronically manipulated sounds of Nielson’s composition. Simon Bainbridge’s Tenebrae, commissioned in 2009 by the Hilliard Ensemble, sets Paul Celan’s post-Holocaust poem on the theme of human suffering. Eerie string quartet chords interweave with a quartet of male voices, creating an otherworldly timbre that speaks to the nature of the human condition. Both pieces are U.S. premieres.

About Ensemble Moto Perpetuo
“consistently invigorating” (New York Times)
Ensemble Moto Perpetuo is a flexible chamber orchestra devoted to collaboration across artistic disciplines, be it dance, theater, visual art, or fashion. We believe that such collaboration is inherent to innovation. EMP prides itself on such boundary-breaking endeavors by upholding our key tenets: innovative music, unique artistic vision, and a lens on the community at large. In a moment of spiritual baton passing, veteran new music group Ensemble Sospeso is collaborating with the young Moto Perpetuo on this special project.
www.empnyc.org

About Ensemble Sospeso
Ensemble Sospeso is an artistic organization committed to the forward evolution of live concert performance in the United States and throughout the world. Using visionary models of concert giving, innovative collaborations, and an unwavering commitment to the establishment of new relationships between cultural producers and audiences, Sospeso seeks to communicate a rich understanding of our inherited musical and artistic traditions. Since making its Carnegie Hall debut in 1998, Ensemble Sospeso has repeatedly asserted itself as a major player in the New York music scene. Sospeso has given dozens of performances nationwide, including appearances at Alice Tully Hall at Lincoln Center (with Pierre Boulez in a critically acclaimed retrospective of his music), Carnegie Hall’s Making Music series (under the baton of Esa-Pekka Salonen), Zankel Hall, the Whitney Museum of American Art, the Lincoln Center Festival, Weill Recital Hall and the Miller Theatre at Columbia University.
www.sospeso.com

About the New Chamber Ballet
“one of the small-scale delights of the New York Dance Scene” (The New York Times)
“this is quirky, high-quality work… Magloire is not just a composer or a choreographer… but an impresario, a Diaghilev in miniature.” (Dance Europe)
New Chamber Ballet’s performances marry elegant, thoughtful choreography and live chamber music, performed by a group of excellent dancers and musicians. The company performs in studios and other non-theatrical venues where the audience experiences the thrill of sounds and movements up close. Founded in 2004, New Chamber Ballet is based in New York City and is led by artistic director Miro Magloire, a  choreographer and composer. In addition to Magloire, an array of talented young choreographers have created works for the company, including Emery LeCrone, Constantine Baecher and Deborah Lohse. Magloire’s affinity for contemporary music – a by-product of his composition training – has given New Chamber Ballet one of the most original musical repertories in the current dance scene.
New Chamber Ballet has presented an ongoing performance series at Manhattan’s City Center Studios since 2005, and has performed at the Jacob’s Pillow Dance Festival’s Inside/Out, the Museum of Arts and Design, the Center for Performance Research among others. The company has also toured nationally and internationally.
www.newchamberballet.com

About Ear Heart Music
“… a feisty contemporary-classical concert series” (The NY Times)
A showcase of highly talented and adventurous performers, composers, and collaborative artists, Ear Heart Music is a modern chamber music series for modern ears. Operating at the Tank in Manhattan for the past three years, founder and director Amelia Lukas “piloted impressive events on a shoestring budget. Roulette offers greater resources, and Ms. Lukas is taking advantage in an ambitious season filled with premieres and cross-disciplinary collaborations.” (The NY Times)