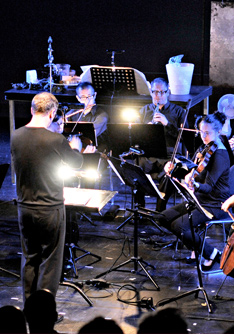 Canada’s remarkable Aventa Ensemble performs a percussion heavy program featuring the US premiere of Simon Steen-Andersen’s Black Box Music for percussion solo, amplified box, 15 instruments and video. In this piece, the revered young composer experiments with the stage as instrument. Black Box Music could be said to be a deconstruction of conducting and puppet theater as well as an exploration and exploitation of the audio/visual relations inherent in conducting and staging. Rolf Wallin’s masterful percussion duo Twine for xylophone and marimba also receives its US premiere. Filling out the program are additional works by Laurie Radford, Michel Gonneville, and Kaija Saariaho.

In Laurie Radford’s _fuse!_, live audio signal processing of the instruments contributes an additional timbral element to the work, by extending individual sounds and the ensemble as a whole, as well as serving as a virtual ensemble that arises from and comments upon the sounds and gestures of the instrumentals.

Norwegian composer Rolf Wallin’s music combines an intuitive freedom with a rigorous mathematical approach, such as use of fractal algorithms to construct melody and harmony, resulting in a music that often hints at the influence of Ligeti, Xenakis and Berio. Twine for xylophone and marimba consists of two streams of sound, both emerging from wood, but still slightly different: the bright and hard versus the dark and soft. The piece demands absolute technical brilliance, an almost telepathic rhythmic contact, and a highly developed musical intuition.

Canadian composer Michel Gonneville has created a work inspired by Margaret Atwood’s non-fiction book on the nature of debt, Payback: Debt and the Shadow Side of Wealth. Gonneville’s work Cantate de la dette perpétuelle / Cantata of the Unredeemable Debt, composed for the Aventa Ensemble, features the full ensemble, plus six soloists (three singers and three percussionists) who move freely throughout the hall.

Described as “one of the most original compositional voices of our time” (Denver Post), Kaija Saariaho is a leading Scandinavian composer of her generation. The Tempest Songbook is a collection of short works for soprano, baritone and ensemble based on William Shakespeare’s text.

The Oslo Sinfonietta premiered Simon Steen-Andersen’s captivating Black Box Music, scored for percussion solo, amplified box, 15 instruments and video, in 2012. The setting is a traditional theatre stage with curtains, props and light; only in this case, the stage is also an instrument. Black Box Music could be said to be a deconstruction of conducting and puppet theatre as well as an exploration and exploitation of the audio/visual relations inherent in conducting and staging. The “grand show” will be in three movements, starting with ‘Ouverture’ and ‘Disambiguation’ and then finishing off with a festive, pompous, self-imploding ‘Finale.’

A showcase of highly talented and adventurous performers, composers, and collaborative artists, Ear Heart Music is a modern chamber music series for modern ears. Operating at the Tank in Manhattan for the past three years, founder and director Amelia Lukas “piloted impressive events on a shoestring budget. Roulette offers greater resources, and Ms. Lukas is taking advantage in an ambitious season filled with premieres and cross-disciplinary collaborations.” (The NY Times)