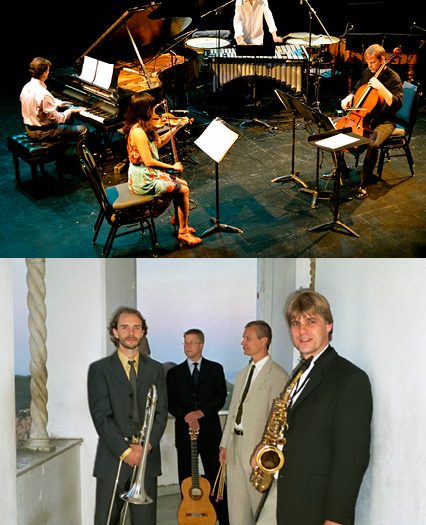 A Double Quartet concert like you’ve never heard before: New York City’s Either/Or and Stockholm’s Ensemble Son team up for five world premieres commissioned specifically for this unique international collaboration by composers from the US and Sweden, including Zeena Parkins (US), Keeril Makan (US), Lisa Streich (Sweden), Richard Carrick (US) and Ivo Nilsson (Sweden). This concert will be presented as a multi-city US and Swedish tour in October 2013, and this special engagement at Roulette will be the only by these two ensembles in the New York City area.

Ensemble Son consists of some of Sweden’s foremost musicians in the field of contemporary music united by the identical endings to their last names (a prerequisite for becoming a member). The unusual instrumentation of the founders of the group has forced the ensemble to commission new works. One of the main ideas of the group is to explore “portrait” programs in the broadest sense. For this reason they invite guests to collaborate with them, including  “Dr Cayabyab – the death penalty as music,” a portrait of Helmut Oehring, and “Improvisation/Notation” with Barry Guy in music by Barrett, Doyle and Guy.

Either/Or is a flexible chamber ensemble based in New York City. Founded in 2004 by pianist/composer Richard Carrick and percussionist David Shively, Either/Or presents compelling new and recent works for unconventional ensemble formations rarely heard elsewhere. Equally informed in American experimentalism and in the European avant-garde, Either/Or performs a repertoire that challenges categorization but shares a common focus on sonic exploration and the unique energy of live performance.  In addition to ongoing collaborations with emerging artists, Either/Or has brought distinguished composers such as Helmut Lachenmann (2008), Paolo Aralla (2009), Chaya Czernowin (2010, 2011), Karin Rehnqvist (2012), and Rebecca Saunders (2013) to New York for portrait concerts and lectures. Either/Or released its first two CDs in 2011, on Starkland and on New World Records.
eitherormusic.org