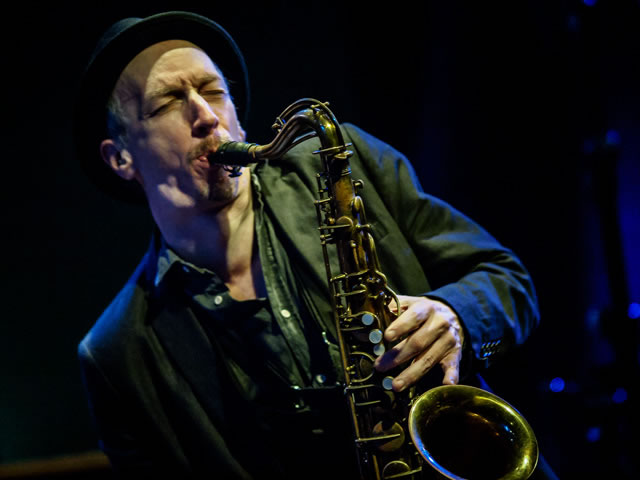 Parisian cellist Vincent Courtois and New York saxophonist Ellery Eskelin met in Europe in 2000 while performing in a large ensemble project led by Lebanese oud player Rabih Abou-Khalil. Sensing an immediate musical rapport they began discussing the possibility of a collaboration. Both musicians admired the playing of Swiss pianist Sylvie Courvoisier (now living in Brooklyn) and with her formed this group in 2002 performing original compositions as well as completely improvised concerts. The ensemble was invited to debut at the prestigious Banlieues Bleues Festival in Paris and has since toured Europe in 2003, 2005 and 2007. This current tour in the U.S. is made possible in part with support from Chamber Music America and French American Cultural Exchange’s CMA/FACE French-American Jazz Exchange Program, funded through the generosity of the Doris Duke Charitable Foundation, the Cultural Services of the French Embassy, Cultural France and FMEO – Le Bureau de la Musique FranÃ§aise and will culminate with a studio recording for release in 2008.

Vincent Courtois was born in Paris in 1968 and began playing the cello at six years of age. He took classical studies at the conservatory in Aubervillier with E. Fauré, R. Pidoux and F. Lodéon while discovering jazz and improvisation with Didier Levallet and Dominique Pifarely.

In 1988, Vincent began playing in various Parisian groups (Christian Escoudé and Michel Pétrucianni) and his first CD as a leader, titled “Cello News”, was released in 1990. Since then Vincent has recorded eight CD’s as a leader, among them; “Translucide” (with Michel Godard and Noel Akchoté) and “The Fitting Room” with (Dominique Pifarely and Marc Ducret) both for Enja Records.

Composer/pianist, Sylvie Courvoisier was born and raised in Lausanne, Switzerland. She started to play piano at age of six initiated by her father, an amateur jazz pianist. She moved to Brooklyn, New York in 1998, where she currently resides. She has played and recorded with John Zorn, Ikue Mori, Tim Berne, Joey Baron,Mark Feldman, Tony Oxley, Yusef Lateef Dave Douglas, Joelle Léandre, Herb Robertson, Butch Morris, Tom Rainey, Mark Dresser, Ellery Eskelin, Lotte Anker, Fred Frith, Michel Godard, Mark Nauseef among others. She has been commissioned to write music for concerts, radio, dance and theater. Her works include:” Concerto for electric guitar and chamber orchestra” ; “Balbutiements” for vocal quartet and soprano ;”Ocre de Barbarie”, a musical performance for metronomes, automatons, barrel organ, piano, tuba, saxophone, violin and percussion. Commissions include the Vidy Theater of Lausanne, Pro Helvetia and Germany’s Donaueschingen Musiktage Festival. Her debut recording “Sauvagerie Courtoise” on Unit Records was released in 1994. Her second recording “Ocre” on Enja Records (Music for barrel organ, piano, tuba, bass and percussion) led to appearances on concert stages all over Europe. In the following years, Courvoisier released 6 CDs as a leader, and 10 CDs as a Co-leader, and more than 20 recordings as a side person or as a guest. Her latest releases as a leader are: “ABATON” with Mark Feldman and Erik Friedlander on ECM Records (2004), “LONELYVILLE” with her new quintet on Intakt Records (2007) and a solo piano album, SIGNS AND EPIGRAMS, on Tzadik Records (2007). Since 1995, she has been touring widely with her own groups and as a side person in USA, Canada and Europe including Jazz and New Music Festivals such as Berlin, Willisau, Donaueschingen, Banlieue Bleue, Saalfelden, Groningen, Visions NY, NÃ¼rnberg, Taktlos, London LMC, Bath Festival, Muenster and Victoriaville Festival, among others. Sylvie is currently the leader of her own quintet “Lonelyville” and the Trio Abaton. She is a member of “Mephista”, an improvising trio with Ikue Mori and Susie Ibarra; “Herb Robertson Quintet” with Tim Berne, Tom Rainey and Mark Dresser; in Trio along with Ellery Eskelin and Vincent Courtois : John Zorn’s Cobra. She also performs regularly in Duo with violinist Mark Feldman. Awards include Switzerland’s 1996 Prix des jeunes créateurs and Zonta Club’s 2000 Prix de la Création.

Ellery Eskelin was born on August 16th, 1959 and raised in Baltimore, Maryland. At age ten he began playing the tenor saxophone inspired by his mother “Bobbie Lee” who played Hammond B3 organ professionally in Baltimore in the early sixties. Eskelin earned a bachelor’s degree in music from Towson University in Baltimore after which he spent a year and a half on the road with swing era trombonist Buddy Morrow. In 1983 Eskelin moved to New York City and began studies with saxophonists George Coleman and David Liebman while performing with a wide variety of musicians from the jazz world.

Eskelin’s recorded output begins in 1987 with the first of three recordings by the cooperative group Joint Venture for the German record label Enja which began his exposure on the European international touring circuit. Eskelin formed the first of many projects as a leader beginning with a trio comprised of bassist Drew Gress and drummer Phil Haynes, releasing “Setting The Standard” (Cadence Jazz) in 1988 and “Forms” (Open Minds) in 1990. This group endeavored to combine it’s roots in the jazz tradition with various concepts of independence and role changing in an attempt to play freely but with strict attention to harmony, time and form. Further explorations of form and structure took place with a short lived group featuring Joe Daley on tuba and Arto Tuncboyaciyan on bakdav drums and percussion. This group recorded “Figure of Speech” for the Soul Note label in 1993. In 1992, an important and ongoing musical relationship with drummer Joey Baron began. The group “Baron Down” (instrumentation of drums, trombone and saxophone) was formed and opened Eskelin’s ears to further possibilities concerning context, musical roles and independence. Joey Baron’s “Baron Down” toured yearly in Europe and made three recordings between 1991 and 1995.

In 1992 Eskelin produced a solo saxophone recording titled “Premonition” (prime source) which opened up musical possibilities with regard to phrasing on the saxophone which he then applied on a larger scale to his compositions for groups resulting in music based largely on structural concerns. Also during this time Eskelin became increasingly interested in exploring new and unusual instrumentation in an attempt to place the saxophone in unique contexts for improvising. In 1994 he formed his current working band including accordionist Andrea Parkins and drummer Jim Black. Eskelin’s compositions for this group introduce a fundamental shift in the relationship between written and improvised material ranging from seamless flow to high contrast and juxtaposition in an effort to give each piece a unique form. The fact that the group is not restricted to acting as a rhythm section with soloist also frees each musician to change roles with great agility. To date Eskelin has written over 50 compositions for this group, each of which has been documented on a series of releases on the Swiss hatHUT record label. The band tours regularly and has performed hundreds of concerts in the US, Canada and throughout Europe.

Other side projects include a group featuring guitarist Marc Ribot and drummer Kenny Wollesen dedicated to the music of Gene Ammons which released “The Sun Died” (Soul Note) in 1996 and performed at major festivals in Europe. Eskelin also tours and has recorded with Dutch drummer Han Bennink having released “Dissonant Characters” (hatOLOGY). In 2000 Eskelin formed a special ensemble consisting of strings, vibraphone and saxophone performing completely improvised music documented on “Vanishing Point” (hatOLOGY). Over the years Eskelin has developed a number of important associations with musicians such as Joey Baron, Gerry Hemingway, Mark Helias and most recently Sylvie Courvoisier and Vincent Courtois. As a side-person Eskelin has worked with a broad cross section of jazz, avant-pop and new-music figures such as organist Brother Jack McDuff, composer Mikel Rouse, guitarist Eugene Chadbourne, oud player and composer Rabih Abou-Khalil, drummer Daniel Humair and the pseudo-group “The Grassy Knoll” among many others.

Eskelin’s recordings as a leader and co-leader (there are currently twenty) have been named in Best of the Year critics’ polls in the New York Times ,The Village Voice, and major jazz magazines in the US and abroad. He also appears on over forty recordings as a side person. DownBeat Magazine named Eskelin as one of the 25 Rising Stars for the Future in its January 2000 issue (“…young players who not only insure the music’s survival but promise to take it to the next level”) as well as including him in the “Talent Deserving of Wider Recognition” category of their Annual Critics Poll in 1998, 2001, 2002, 2003 and 2004. Eskelin was also a nominee for the prestigious Jazzpar award in 2003.