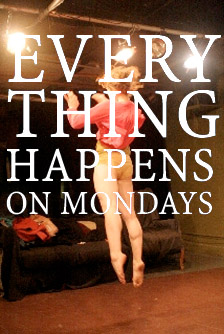 Every other Monday in July and August “EVERYTHING” happens at ROULETTE!  ROULETTE’S SUMMER SERIES of DANCE / MUSIC / MULTIMEDIA performances and collaborations.

Jodi Bender is a dancer and choreographer who has shown work around NYC this past year at Luis Lara’s NOT Festival, THROW at The Chocolate Factory Theater, The Flic Fest After Hours Cabaret at Irondale, on Sarah Maxfield’s One Shot web performance serial and at the AUNTS performance party. She currently performs for Laurie Berg, Rebecca Davis and Tara O’Con and is collaborating with Erin Cairns Cella on an ‘Act-In-Progress’ they perform as The Brunette Sisters.