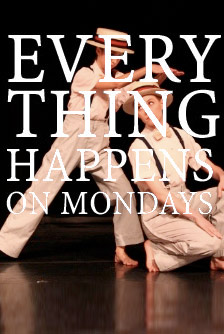 Every other Monday in July and August “EVERYTHING” happens at ROULETTE!
ROULETTE’S SUMMER SERIES of DANCE / MUSIC / MULTIMEDIA performances and collaborations
featuring works by Cori Olinghouse and guests Kai Kleinbard & Shona Masarin

Exploring the body as a conduit for transformation, Cori Olinghouse will present excerpts from her latest Ghost lines Project.  Inspired by ghost towns, silent era clown films, voguing, and eccentric dance, the characters in Ghost lines conjure a vaudevillian past as traces – remnants; as if rising from the dust, transmitting signals of light and shadow.

Olinghouse will also present a rare work-in-progress screening of her latest collaboration with film artist, Shona Masarin – “Ghost line” – the film.  Ghost line is a 16mm black and white film that invokes the spirit of Vaudeville through a Dada/Surrealist eye.  The filmic space is amorphous and mysterious, with the ability to mimic the shapeshifting logic of the character’s visual and kinetic rhythms. Using the body and the anatomy of the film strip as the physical testing site for multiple identities, Shona and Cori use a practice of “ghosting” to contact the depths of our historical collective unconscious.

For more information about our Ghost line – the film, please visit us online at: http://ghostlinesproject.tumblr.com/

“This slop is where I live, bitch,…/But like a bur in a dog’s coat his rage/has borrowed legs.  We bring it home.  It lives/like kin among the angers of the house,/ and leaves the same sharp zinc taste in the mouth…”

This piece is inspired by the imaginations of the young people I have the pleasure of working with on a daily basis, and also special thanks to my partner, Cori.

Kai Kleinbard was born and raised in Brooklyn and graduated from Sarah Lawrence College.  Kai’s approach to movement is influenced by his research of martial arts, freestyle movement forms (including voguing, popping, waving, and house) and principles from the Alexander Technique.  He is an AmSAT certified Alexander Technique teacher and also an academic tutor specializing in developing and organizing his students’ work and learning habits.  He is currently developing the “Body Literate Initiative” with partner, Cori Olinghouse. http://kaikleinbard.tumblr.com/

Shona Masarin is a New York City based Australian film artist whose work involves the physical, alchemic, and sculptural manipulation of found images and materials to create abstract animations. Finished works have taken the form of of Super 8mm or 16mm films, film performances with live music, and installations; presented at film festivals in Australia, including the Melbourne International Film Festival, and at various alternative art spaces and galleries in Brooklyn. She has received funding for her work from the Australia Council for the Arts and the Ian Potter Cultural Trust.  http://shonamasarin.com/

Cori Olinghouse is a movement artist and AmSAT certified Alexander Technique teacher.  Her work has been presented by Danspace Project, The Flynn Center for the Performing Arts, Brooklyn Museum of Art and Movement Research, among others.  Cori performed with the Trisha Brown Dance Company from 2002-06.  In 2005, Cori began a dancing dialogue Bill Irwin and has since been researching a variety of movement forms that explore physical transformation, including: eccentric dance, mime, and voguing. Cori was a Movement Research Artist-in-Residence (2009-2011).  She is currently developing her creative practice research, Body Literate Initiative, with partner, Kai Kleinbard. Visit coriolinghouse.com for further information about Cori’s teaching..