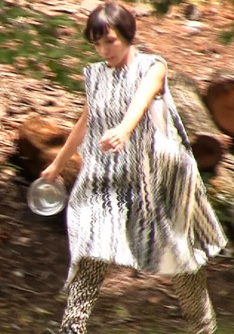 Every other Monday in July and August “EVERYTHING” happens at ROULETTE!

Artists and info below:

UNCONDITIONAL SATISFACTION GUARANTEED is an aura specific work that traverses elements of both place and nature.  It is an exploration of a suburban vastness, with its controlled environs, that is at the same time nestled in the wooded lushness and wisdom of the Hudson Valley.  Fantasies emerge through video, movement, and objects of what could be possibly going on behind the landscaping and into the wild.

Felicia Ballos has been allowing the experiment of raising a family, while living and traveling in a DIY bus home conversion, to shift her dance based art processes.  After many years of living as a choreographer and performer based in New York City, Ballos is currently finding ritual through labor, the sacred of the everyday, and how movement connects all beings.
DARKMINSTER
O, May God have mercy on your mortal souls.
The Dark Lorde duped Buckminster.  And out of the mire a malevolent force has entered the hollowed corporal vessels that once belonged to that very same beloved triad.  From their haunted horns an ominous force emanates.
Buckminster, once a beacon of hope and order in this chaotic life, has been transformed into DARKMINSTER, the hideous, caped, evil-doer =p  more sinister than anything upon which the world has ever laid eye.
Suddenly, utopia perishes, order unravels, causes no longer precede effects, and sometimes up is down.  Down, up.  Uuuuuuup, down………    DOWN!!!!!!!!!!!!!