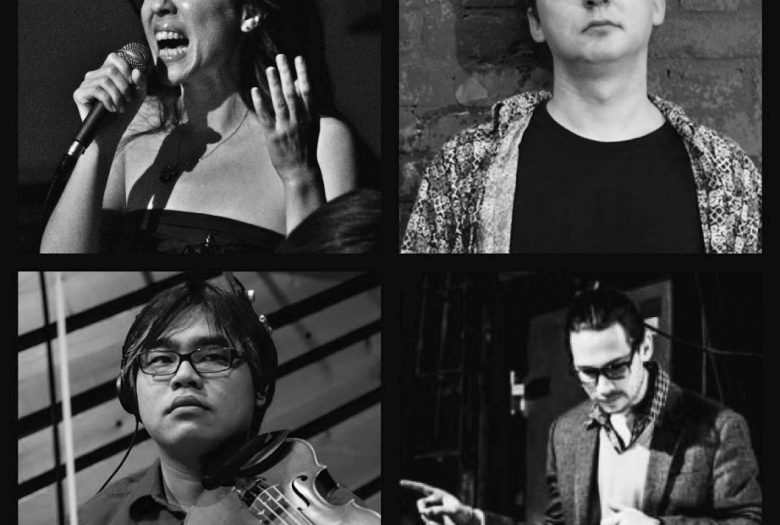 Evolver Records is dedicated to releasing innovated and creative music that is focused on artist integrity and vision. Our artists are revolutionizing art and creating a new era in music. Please visit EvolverRecords.com.
Evolver Records and artists have been featured in All About Jazz, the Jazztimes, Jazz Japan, The Boston Globe, the Jazz Record, and the NY Times.

Matthew Shipp was born December 7, 1960 in Wilmington, Delaware. He started piano at 5 years old with the regular piano lessons most kids have experienced. He fell in love with jazz at 12 years old. After moving to New York in 1984 he quickly became one of the leading lights in the New York jazz scene. He was a sideman in the David S. Ware quartet and also for Roscoe Mitchell’s Note Factory before making the decision to concentrate on his own music.

Mr Shipp has reached the holy grail of jazz in that he possesses a unique style on his instrument that is all of his own- and he’s one of the few in jazz that can say so. Mr. Shipp has recorded a lot of albums with many labels but his 2 most enduring relationships have been with two labels. In the 1990s he recorded a number of chamber jazz cds with Hatology, a group of cds that charted a new course for jazz that, to this day, the jazz world has not realized. In the 2000s Mr Shipp has been curator and director of the label Thirsty Ear’s “Blue Series” and has also recorded for them. In this collection of recordings he has generated a whole body of work that is visionary, far reaching and many faceted. www.matthewshipp.com

Lola Jung Danza‘s mother is from South Korea and her father is Italian American. At an early age Ms. Danza started studying the traditional Korean healing arts that are passed down through the maternal line. Mudangs (female shamans) are the medicine women in Korea using music to heal physical and mental ailments. Using the voice and sound in a different form that celebrates women has spurred Ms. Danza to create this new project that will debut at the Roulette. Ms. Danza has performed at the Kennedy Center in Washington DC and been the named Jazz Star in Japan. She has performed and recorded with Ornette Coleman, Bob Moses, Ben Monder, Mat Maneri, and Steve Kuhn to name a few.

Born and raised in Kuala Lumpur, Malaysia, Fung Chern Hwei absorbed a large amount of musical information since young in his surroundings that is filled with Chinese, Malay, South Indian, and of course, “Western” culture. After a long search for violin teacher since he was 4 years old, he finally found one when he was 8 and since then thrusted himself into the world of violin and never looked back. Upon finishing his masters studies at the Aaron Copland School of Music in New York, Chern Hwei chose to stay back to pursue his musical career, playing different genres of music, absorbing yet even more musical languages and expressions. Styles that he plays frequently includes western classical, jazz, Middle Eastern music, tango, early music, rock, and hip hop. He recently self-released his debut album, “From The Heart”. Artists that he was fortunate to work with include Uri Caine, Ryuichi Sakamoto, Stanley Clarke, Tony Bennet, Bobby McFerrin, Steve Wilson, Elliot Sharp, Billy Martin, Roberta Piket, Dave Taylor, Ivo Perelman, Linda Oh, Jenny Lin, Mikael Karlsson, Dana Leong, Makoto Ozone, Paquito d’Rivera, among others.

George Spanos George Spanos (b. 1979), originally from Greece, is an internationally acclaimed drummer who is based in New York. He started taking piano lessons at the age of eight, continuing at the age of fourteen with his studies of modern drums and percussion. Spanos’ recent highlights include his performances with John Zorn, Ikue Mori, Juini Booth, Lawrence Clark, Marc Ribot, On ka’a Davis, Sylvie Courvoisier, Erik Friendlander, Steve Swell, Miles Griffith, The Downtown Avengers and many other incredible artists. Spanos has appeared in concerts and jazz festivals as a guest in Europe, United States and Canada. Spanos has studied with Michael Carvin, Victor Jones and has attended seminars and master classes with Antonio Sanchez, Brice Wassy, Ron Savage, Gary Burton, Horacio el negro Hernandez, and Francisco Mela. His versatile background and education, enabled him to perform as a classical percussionist with world-renowned orchestras (Symphony Orchestra of Iasi) and known music ensembles at the most famous Greek venues (Megaron Mousikis-Athens Concert Hall, Ancient Agora, Half Note Jazz Club, Pallas Theater and His first personal recording Jungle of Illusions,which he co-arranged, co-produced, composed and recorded the drums/percussion with Yiannis Kassetas (sax,arranger,composer, producer) released by puzzlemusik in Europe and by Blue Truffle Music label in the United States, received great critical His latest album “Dreams Beyond,” was released in November 2014 by Evolver Records, U.S.A and brings together a stellar cast of legendary improvisers such as bassist Juini Booth (Sun Ra, McCoy Tyner, Elvin Jones, Tony Williams and Art Blakey), guitarist On ka’a Davis (Sun Ra), saxophonist Lawrence Clark (Rashied Ali) and Ikue Mori (John Zorn), as well as vocalist and Evolver Records founder Lola Danza, clarinetist Vasko Dukovski, tubist Ben Stapp, violinist Fung Chern Hwei, cellist Adam Fisher, percussionist Sayun Chang, trumpeter Keaton Akins, and pianist Simone Weißenfels. As a result, these fine musicians will take the listeners on a dream-like musical journey through time, from the sounds of the past to the sonic landscapes of the future and back. The album is a bold mix of Ornette Coleman and John Coltrane inspired free jazz, John Zorn-esque Downtown NY avant-garde, and a touch of electronic soundscapes.

Although trained as a classical/orchestral tubist with legendary pedagogues, Tommy Johnson and Roger Bobo, Ben Stapp began his professional career recording for the improvised music label Clean Feed with the likes of Herb Robertson, Alipio Neto, Ken Filiano and Michael T.A. Thompson. His first project as leader took him on tour in Portugal and then finally to New York to record with Tony Malaby and Satoshi Takeishi. With the self release Mr. Stapp was quickly recognized by All About Jazz, as “most certainly one to watch” and “the debut of a fresh new voice.” The Village Voice gave it an Honorable mention and the New York Times greeted it as a “rugged trio.” Since his move to New York he has been composing and performing with his new mixed ensemble projects – Zozimos, and has played at Roulette, the Stone, the Tea Lounge, Cornelia Street Cafe and the Downtown Music Gallery among others. Ben Stapp plays and subs with such tuba luminaries as Howard Johnson, Bob Stewart, Marcus Rojas and Jose Davila. Mr. Stapp has toured the world, playing in international festivals with several groups including Red Baraat, Chia’s Dance Party, Eli Yamin’s Blues Band and his own trio and more.