Experiments in Opera: Happiness is the Problem by Jason Cady / Excerpts from Brother Brother by Aaron Siegel / Cough Button’s To Scale 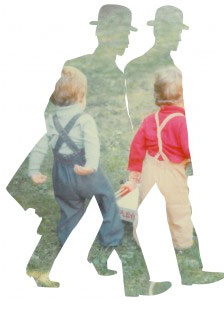 Happiness is the Problem, by Jason Cady

“But, I mean, in order to, to actually do human trials you have to go through all this rigmarole, and rent is due, we don’t have time”¦”

Happiness is the Problem is a two-act opera buffa and comic book about idealism and disillusionment. It presents three young women who sell an elixir of happiness derived from the secretions of slugs which they market as “Euphoressence.”

Happiness is the Problem has had preview performances at The Stone, the Wilmette Theater, and Issue Project Room.

Brother Brother is an operatic work for percussion, strings, choir soloists and actors that explores the enigma of brotherhood. The story follows the lives of two pairs of brothers-one historical (Orville and Wilbur Wright) and one fictional (Red and Blue)-as they discover the character of their bond to one another.

To Scale, by Lynn Levy, Dave Ruder, and Aliza Simons

To Scale, is a work-in-progress that details the relationship between an architect and her scales — the two-dimensional characters who populate architectural models.  Co-written by Lynn Levy, Dave Ruder, and Aliza Simons, To Scale explores the gap between creator and created.  The piece will also play with novel techniques to bridge the gap between singer and listener, including the use of localized transmitters, picked up by radios in the audience.

Happiness is the Problem, by Jason Cady

To Scale, by Lynn Levy, Dave Ruder, and Aliza Simons