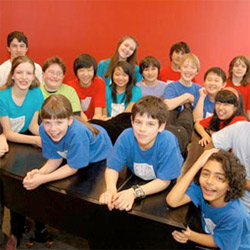 Face the Music at Roulette 2009

Come hear the new music stars of tomorrow! Made up of twenty students, ages 11 to 16, Face the Music was founded in the fall of 2005 by Special Music School Music Director Jenny Undercofler and composer Huang Ruo. In January of 2008, the group helped to re-open Merkin Hall with the premiere of Ira Mowitz’s Kol Aharon for violin, digital soundtrack, and ensemble. Since then, Face the Music has performed at Roulette, Le Poisson Rouge, the Queens Museum, and Hudson View Gardens. Later this spring, FTM will give the US premiere of Gérard Grisey’s “Manifestation,” at Merkin Hall.