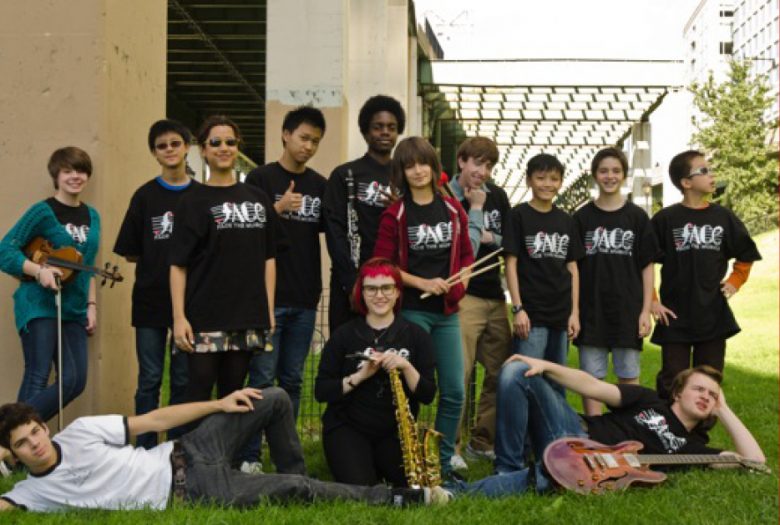 Loud instruments! Shouting! A movie! What better way to open the month of December than with a blast of sound from Face the Music – NYC’s new music ensemble for young players?

The concert will feature the world premiere of two works by Face the Music’s own players: TJ Adorno’s jazz-themed Modern Hieroglyphics and Paris Lavidis’ This is Not Spartacus for nineteen musicians who also act. The students will also present Michael Gordon’s epic Gotham, a tribute to the city itself that accompanies a majestic film by Bill Morrison; and Marc Mellits’ rollicking String Quartet no. 2, Revolution.

No advance ticket sales.
Tickets: $10, cash only at the door.
FREE for KIDS under 5

Called “a force in the new music world” by The New York Times, Face the Music is the country’s only ensemble for 18-and-under that is solely devoted to the music of living composers. In the space of nine years Face the Music has grown from an after-school club of eight kids to a massive group of over 135 students from all over the tri-state area who convene every week to write, rehearse, and perform music together. The ensemble advances Kaufman Music Center’s commitment to contemporary music and provides unparalleled performance and education experiences for the next generation of musical leaders.

Under the direction of Dr. Jenny Undercofler, Face the Music performs nearly 35 concerts each season in venues around the city ranging from schools to museums to concert halls. Highlights from recent seasons include performances at Lincoln Center Out of Doors, the Bang On A Can Marathon, the Ecstatic Music Festival, and the River to River Festival, where Face the Music opened for the Philip Glass Ensemble. Face the Music has collaborated with many professional artists, including the JACK Quartet, with whom they performed Steve Reich’s Triple Quartet at the Baryshnikov Arts Center last spring. Recently, Face the Music launched “Kronos at Kaufman,” a major collaboration with the Kronos Quartet for the 2013-14 season.
kaufmanmusiccenter.org/mch/series/face-the-music
facebook.com/facethemusicnyc