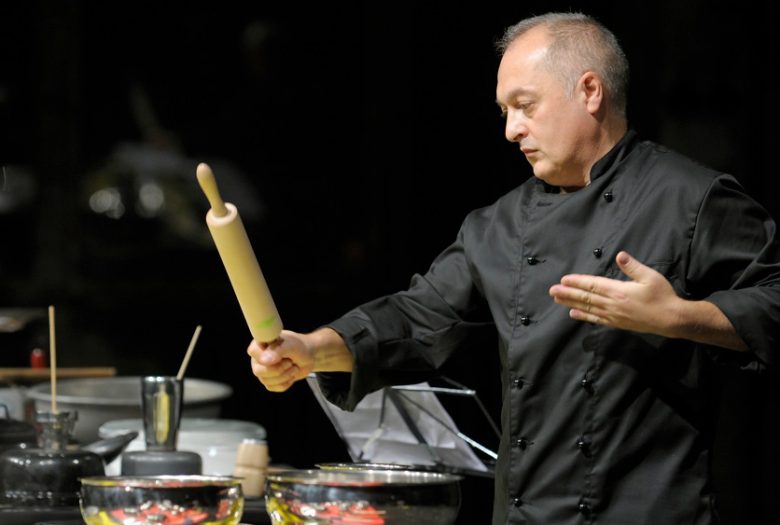 “Fast Forward is a New York based English composer and performer who makes music with almost anything. In his solo performances, he adopts a sculptural approach to creating sound. He examines the sensual, tactile qualities of the objects, then ties the sound of the objects to the physical gesture that creates the sound. The result is a stage presence that integrates the visual element of the performance with the music. ” Forward is the first musician to combine the sweet repetitions of Reich, the raw decibel power of Branca, the randomness of Cage and Wolff, and even the stochastic textures of Xenakis. It’s a potent combination,carried out with irresistible momentum. ” – Kyle Gann, the Village Voice.

Fast Forward lived in Northern England until he emigrated to the U.S. in 1976. Strongly influenced by his surroundings, he chooses to use an empirical approach towards pursuing a musical outcome. He is best known for his musical explorations of the Trinidadian steel pan and his music-theater works for diverse instrumentation. His culinary concert Feeding Frenzy for five musicians, five cooks, five waiters, and the audience was first performed in New York in 1994 and continues to be performed worldwide. Producing 500 plates of amplified food in 90 minutes, it uses local performers and has been staged for many occasions, including the 15-year celebration of Freunde Guter Musik at The National Gallery in Berlin and the Time of Music Festival in Finland. It also ran for three seasons at The Kitchen in New York. Trommelfeuer, an ensemble work produced by the DAAD in Berlin, includes the use of stainless steel oil drums, sewer pipes, truck suspension springs, explosive-hammers, and multiple drummers. The metal walls of a ferryboat in the Sea of Japan were once used as musical collaborators. In solo performances, Fast Forward adopts a sculptural approach to creating sound. He examines the sensual, tactile qualities of the objects, then ties the sound of the objects to the physical gesture that creates the sound. He attended art colleges in Leeds and Newcastle in England, where he studied with Stuart Marshall. From there, he studied electronic music with Robert Ashley and David Behrman at Mills College and moved to New York City in 1981. In conjunction with The Wooster Group, he curated “The Accident,” nine evenings of performance music at The Performing Garage in New York City. Fast Forward toured with the Merce Cunningham Dance Company from 1994 to 1997.