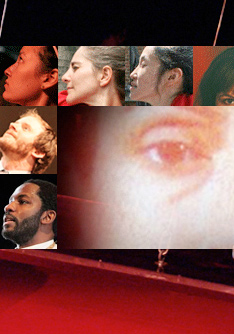 Join us after the concert for a Q&A with Samita Sinha!

This premiering collaborative musical version of the 6-play epic The Medead fuses Templeton’s multivocal poetic fireworks with Sinha’s soaring vocals and instrumentation, layering ancient and future soundscapes.  10 years in the making, The Medead ranges across history and the subconscious to excavate the multi-viewpoint reverberations of a myth – of east and west, of a woman’s power – to “sing a skin of language over the invisible”.  With Anna Kohler, Clarinda MacLow, Graziella Rossi, Dawn Saito, Valda Setterfield and Stephanie Silver, all as Medea, Peter Sciscioli as Orpheus, Andrew Zimmerman as Theseus; also featuring Jason and the 4 Fathers.

The performance is approximately 3 hours, with an interval.

Fiona Templeton works in the relationship between performance and audience; language as a material and as the body; and space as both large-scale and the intimate. She was a founding member of The Theatre of Mistakes in the 70s, and is director of the New York-London performance group The Relationship.  She has published 12 books of poetry and performance, and teaches at Brunel University in London.  Recent work includes Bodies of Memory at Tate Britain; Aguas Dulces, Aguas Saladas, a collaboration with the Estuario de la Bahia de San Juan, Puerto Rico; and directing works by Michael Gottlieb and Leslie Scalapino.  The Medead will be published by Roof Books.
www.therelationship.org

The Relationship is supported by New York State Council on the Arts, with funding from the Leslie Scalapino – O Books Fund.