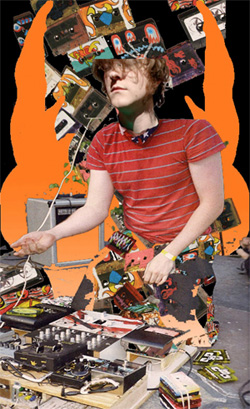 This is the release show for, and ultimate example of, the NOVA CRIMES tale. A live sound collage/ video performance that slinks along the back lot of the NOVA line, the NOVA rift. Running back from each terminal node, the NOVA universe exists simultaneously with our own, refracting through non-euclidian space, fed on cell phone signals, drunk sweat, and Human static. At the end of the dark street, the ultimate NOVA CRIME is committed in the cold florescent light of the willing city. Perfect mental attrition, slammed doors, distilled of the dreams of missed connections, the weak hand drops on the cracked touch screen, the phone disappears as it hits the blacktop. A noir mystery of corrupt detectives, alien mind control and living information possession, experienced as a broken wall of sound. Also the release party for the NOVA CRIMES limited edition cassette out on Green Age Records.

G Lucas Crane is a sound artist and sound performer from Brooklyn NY working within the mediums of the manipulated analogue cassette, live collage, noise, environment/life recording and pure frenzy. Many years recording and playing his sonic diary, put to tape and hacked to pieces live, have yielded collaborations such as the psychedelic rock band Woods, Wooden Wand and the Vanishing Voice and Time Life, theater work at Ps122, Here Theater and Ontological-Hysteric, and sweaty basement conflagrations around the world with his solo project, Nonhorse. He is a founding member of the art collective and performance space Silent Barn, in NYC.

Chris Forsyth and Koen Holtkamp, two of the busiest artists in the US underground, will release their first LP “Early Astral,” on Blackest Rainbow in December 2011. This Roulette concert will be their first NYC performance as a duo, and will feature the expansive material from “Early Astral.” Holtkamp’s swirling analog synth textures and Forsyth’s liquid psych blues guitar lines create entirely unlikely juxtapositions of chin-on-chest spaciness and chugging rhythms with crystal clarity. 80s Dead jamming at Epcot? Popol Vuh meets ZZ Top?. Actually, yes, you could say that.

Guitarist Chris Forsyth’s hypnotic compositions assimilate minimalism and psychedelia with art rock, folk, and blues influences. He has toured throughout Europe and the US with such like-minded artists as TrÃ¤d GrÃ¤s och Stenar, Steve Gunn, Tetuzi Akiyama, and Ignatz, and as a member of gothic junk folk expressionists Peeesseye, the group he founded in 2002 with Jaime Fennelly andFritz Welch. He also plays in the elusive experimental project Phantom Limb & Bison and has collaborated with Koen Holtkamp, Meg Baird, Nate Wooley, Shawn Edward Hansen, and choreographers Miguel Gutierrez and RoseAnne Spradlin, among others. “Paranoid Cat,” Forsyth’s most recent LP of new material, was released in March 2011 on Family Vineyard and has been described as “the work of an emergent master” (Uncut) and “a rapturous transmutation of noise into light” (Wire). In December, Family Vineyard will be rereleasing his “Dreams” LP, originally issued in 2009 as an edition of 100 on his own Evolving Ear label and almost immediately out of print. Forsyth is a recipient of a 2011 Pew Fellowship in the Arts and lives in the City of Philadelphia.

After several years focusing predominantly on film and video, Koen Holtkamp (b. 1978 NL) began working with sound in 1997. He co-founded the apestaartje collective/label in 1998 while studying at The Art Institute of Chicago. Holtkamp has released five albums as Mountains (Apestaartje, Catsup Plate, Thrill Jockey), a duo project with Brendon Anderegg as well as several albums under his own name (Type, Thrill Jockey). He has toured extensively throughout the US and Europe performing everywhere from festivals, art galleries, and museums to basements, communes, churches, and rock clubs. Holtkamp has shared bills with Fennesz, Loren Connors, James Blackshaw, Tape, Tim Hecker, Oval, Tony Conrad, Supersilent etc and collaborated with Ben Vida and Chris Forsyth amongst others. He has also been included in several exhibitions and art projects, most notably at the Centre Pompidou in Paris and the Dissolving Localities Project in Jerusalem. His current solo performances utilizes a customized analog/digital performance system which integrates guitar, synthesizer and modular electronics via various strands of processing that communicate via control voltage to create an extremely gradual and hypnotic listening experience. He’s currently finishing a new solo album based on video footage of rivers he shot in upstate New York titled ‘Liquid Light Forms’.