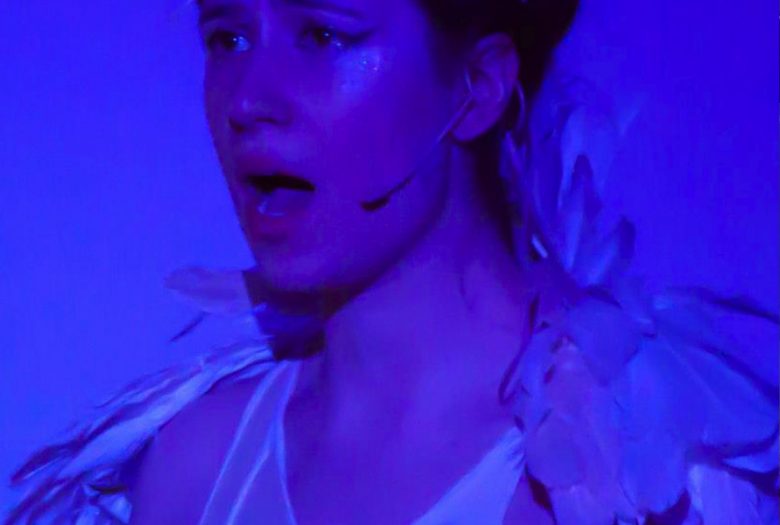 Commissioned by Roulette and the Jerome Foundation, “Bodiless” is the first evening-length opera by Gabrielle Herbst. Premiering at Roulette on April 8th (8pm curtain), the work, with libretto by Iceland-based Canadian writer Angela Rawlings, takes its inspiration from French feminist writer Hélène Cixous’ dream diaries Dream I Tell You. Vocalists Ariadne Greif, Lucy Dhegrae, and Gabrielle Herbst will be joined by Contemporaneous. Costumes, lighting, and set design will be combined in Puerto Rican/Brooklyn-based designer Zaida Adriana Goveo Balmaseda’s unique original costumes, which weave a web of lights into each outfit.

Progressing through three dream-like non-narrative tableaux exploring themes such as birth, life, and death, the three singers simultaneously embody each of the three bodiless fates, singing text which ranges from abstract vocalises, to surreal associative poetry. A rule of three holds true throughout the opera. The instrumentation is comprised of trios of singers, flutes, clarinets, strings, a trio of plucked and struck stringed instruments: harp, piano, electric guitar, and finally percussion. The opera’s three movements through birth, life, and death are echoed in linguistic experimentation in the libretto. The first movement explores prefixes and pronouns (birth of identity), the second movement full sentences describing dreams (life experience), and the third movement which, through suffixes and text from earlier in the piece, moves towards ending with breath (death).

Gabrielle Herbst (b. 1986) is a composer and vocalist residing in Brooklyn. She has premiered her compositions at Roulette, The Stone, Cabinet Magazine’s Exhibition Space, Issue Project Room and HERE Arts Center. Recipient of the 2011 Artist Residency at Robert Wilson’s Watermill Center in partnership with New York Theater Workshop, Herbst received commissions from the new music ensemble Contemporaneous and Experiments in Opera at Issue Project Room. She is a 2012 Con Edison Composer-in-Residence through Exploring the Metropolis, Inc. as well as a 2013 Composer in Residence at Atlantic Center for the Arts. As a featured vocalist she has performed with Valgeir Sigurðsson, Zeena Parkins, Elliott Sharp, Da Capo Chamber Players, Contemporaneous, Allie Avital Tsypin at The Kitchen, and Marina Rosenfeld’s Teenage Lontano in the 2008 Whitney Biennial. She has studied composition with Joan Tower, Martin Bresnick, Marina Rosenfeld and Zeena Parkins, voice with Ilka LoMonaco and clarinet with David Krakauer. Gabrielle is currently recording her debut album with Software Records/Mexican Summer to be released in the fall, 2014.

Angela Rawlings (b. 1978) creates work informed by her research in acoustic ecology, counter-mapping, and ecopoetics. She is the recipient of a Chalmers Arts Fellowship (Canada, 2009) and held the prestigious position of Arts Queensland Poet-in-Residence (Australia, 2012). In 2013, her work Áfall / Trauma was shortlisted for the Leslie Scalapino Award for Innovative Women Playwrights. Rawlings’ 2012 digital publication Gibber amassed sound and visual poetry from Australian bioregions. Her literary debut Wide slumber for lepidopterists (Coach House Books, 2006) received an Alcuin Award for Design; the book is currently being adapted for stage production by VaVaVoom, Bedroom Community, and Valgeir Sigurðsson.

Zaida Adriana Goveo Balmaseda (B.1989) Born in Puerto Rico to Cuban and Puerto Rican parents, she first learned ‘to make’ from her mother and grandmother who are master craftswomen. A graduate from the Fashion Institute of Technology; she holds a B.F.A. in International Fashion Design: Knitwear, and a minor in Italian (after two years studying abroad at POLIMODA, Florence, and Politecnico di Milano).

Zaida Adriana Goveo Balmaseda is the artist/designer/maker behind BALMASEDA, a small label that creates garments/products that embrace a new kind of luxury; one that combines humble materials with exquisite artisanal techniques. It is a hands-on manifesto that explores the symbiotic relationship we could have with our clothing and the environment.