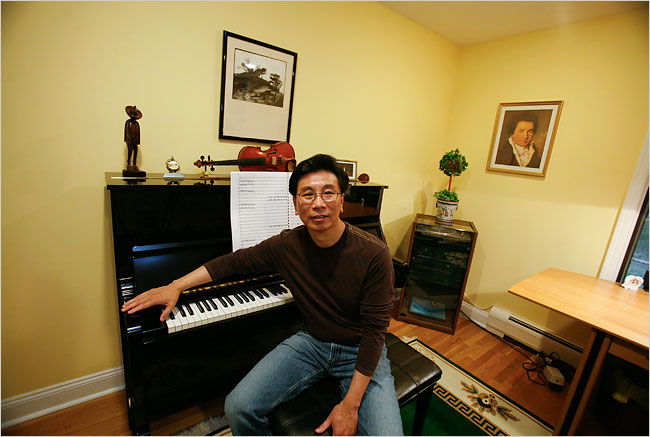 Ge Gan-ru is China’s first avant-garde composer and one of the most original composers of his generation. On March 26, the virtuoso players of ModernWorks will offer a rare glimpse of Ge Gan-ru’s extraordinary music making in an evening concert of three of his string quartets as well as his landmark solo cello piece Lost Style, the first avant-garde work in China. The three string quartets, recorded by ModernWorks, will be released by Naxos in June 2009. One of the quartets, his fifth, “Fall of Baghdad” will be a New York premiere.

ModernWorks was formed in 1997 by cellist and longtime concert producer
Madeleine Shapiro. The focus of the ensemble is the exploration of the wealth of
recent repertoire written for strings in a variety of combinations. Though the
core is a string quartet, the ensemble also performs repertoire in numerous
other combinations; string duos and trios, as well as works with voice, percussion
and accordion. Its ModernCelli ensemble performs music for multiple cellos,
and the ensemble also presents concerts in a violin, cello and accordion trio
format. This is an area of the contemporary repertoire which is very rich, but
not being consistently explored by most ensembles. The ensemble is committed
to multiple performances of new and commissioned works, as well as of existing
works that are often neglected after they receive a premiere performance.

Madeleine was the founder, and co-director of The New Music Consort for 21
years, and ModernWorks is a continuation and expansion of her work in the field
of contemporary music. The ensemble performs an eclectic range of new works by
both established and emerging composers, and participates in the creation of
new works. In the short time that the ensemble has been in existence, it has
won critical acclaim for its New York seasons. It has also presented numerous
New York or United States premieres of works by both young, emerging composers,
and such diverse established composers as Sofia Gubaidulina, Kaija Saariaho,
Luciano Berio, Iannis Xenakis and Bernard Rands. ModernWorks is proud to have
been the recipient of a commissioning grant from Meet the Composer to
commission a duo for cello and accordion by the eminent American composer Charles
Wuorinen. The work received its premiere in January, 2002. The ensemble is proud
to have received a second Meet the Composer Commissioning Award to commission
a work for violin, cello, accordion and electronics from composer Anthony
Cornicello, thus continuing it’s expansion of the strings and accordion
literature. ModernWorks takes particular pride in its work with younger American
composers whose works are presented annually on both the New York series and on tour
in the United States and abroad.

ModernWorks consists of a core of some of New York City’s most prominent
performers of new music. The ensemble is a member of The New York Consortium for
New Music and has appeared in New York on Sonic Boom 6, 8, 9, the festival’s
10th anniversary marathon at The Knitting Factory, and Sonic Boom 11, also at
the Knitting Factory. Other NY appearances have included two seasons at the
Sylvia and Danny Kaye Playhouse in which the ensemble was featured in a three
concert series of 20th century Italian music; the museum of Arts & Design (7
seasons) andNorthRiverMusic (3 seasons). The ensemble has been heard on NPR’s
Performance Today and WNYC’s “New Sounds” and has been featured in an on-line
webcast in the American Music Center’s NewMusicBox. ModernWorks held a residency
at New York University where it performed in the university’s new Black Box
theater and presented lecture demonstrations and readings of works by student
composers.

ModernWorks is looking forward to the release 2009 of it’s most recent
recording, the complete string quartets of Ge Gan-ru, on the Naxos label.

Recent touring appearances have included The A.M.B.E.R. Festival in Istanbul,
Turkey, the Freer Gallery of Asian Art at the Smithsonian Museum in
Washington,D.C., the International Festival of Cello Ensembles in Beauvais, France and
a concert tour in Italy with appearances on such prestigious festivals as
Nuovi Spazi Musicali (Rome) and Rive Gauche Concerti (Turin). Other recent
concerts took place at the African Art Museum, NJ (2 seasons) in connection with the
New Jersey Composer’s Guild; the Hudson River Center for Contemporary Art; at
CUNY with the American Accordion Association (2 seasons); the “Take Five on
Tuesdays” series at the University of Maryland’s new Clarice Smith Performing
Arts Center; the World Music Festival at Montgomery College, Rockville, MD; and
an appearance in collaboration with jazz legends Roscoe Mitchell and Muhul
Richard Abrams on Mutable Music’s Sounds Like New festival celebrating 15 years
of the prestigious Interpretations series.