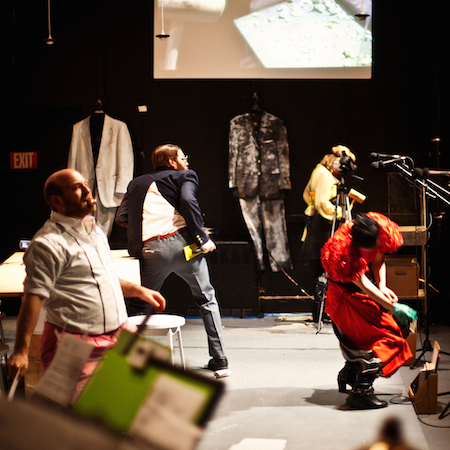 New York Girls 2: Space Control is an exercise in extremes and a fanfare for the dispersed. False pretenses, controlled feedback, plagiarism, and precisely placed things. It is a collage of materials–some of its specific to New York Girls 2, some are fragments from other pieces. This structure consciously refers to Merce Cunningham’s Events, which would take choreographic material from his dances and arrange it into a new, independent work.

Object Collection‘s New York Girls 2: Space Control is a sequel to a concert given by Copenhagen-based ensemble SCENATET at SPOR Festival in Aarhus, Denmark in May, 2014. For this performance, Object Collection is joined by Danish ensemble SCENATET, making their New York  and USA debut. The evening-length performance will include instrumental and vocal music, theatrical elements, lights and staging, and live video.

Object Collection was founded in 2004 by writer/director Kara Feely and composer/musician Travis Just. Based in Brooklyn, the group operates within the intersecting practices of performance, experimental music and theater. They are concerned with simultaneity, complexity, and radicality, combining dense layers of text, notation, objects and processes. They work to give audiences unconventional viewing experiences through the merging of theatricality and pedestrian activity. Their works upset habitual notions of time, pace, progression and virtuosity. They value accumulation above cohesion.

SCENATET was founded in 2008 by artist, curator and festival director Anna Berit Asp Christensen as an ensemble of soloists and artists for contemporary art and music. A creative forum with members from the visual art, film, composers, musicians and performers. SCENATET is an ensemble that designs every concert individually. This Danish ensemble sees itself as a creator of conceptual art works and processes of discovery, in which music is just one part. In fact SCENATET is not a traditional ensemble at all, but rather a multifaceted and unique unit within the field of the contemporary arts–and neither does the ensemble really give traditional concerts.

This performance is also part of series of performances supported, in part, with funds from GENERATE: The Frances Richard Fund for Innovative Artists of Promise. GENERATE, instituted in celebration of Roulette’s 35th Anniversary in 2013, aims to provide immediate, practical assistance to artists, helping them achieve ambitious work to be presented in our theater. Click here for more information about how you can contribute to GENERATE.