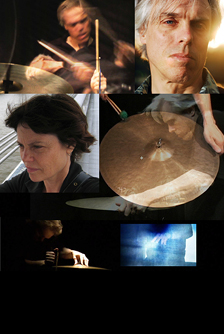 This solo program will present the culmination of the past sixteen years of solo work by percussionist, composer, improviser, and more recently visual artist, Gerry Hemingway, including his interactive collaborations with visual artist Beth Warshafsky. Highlights of the program will include the premiere of Mr. Hemingway’s film Kernelings that is being published along with his long awaited solo CD, the first since 1996. Hemingway will perform solo works for drum set, live electronics, sampling and voice, and will also feature a number of interactive works so far only presented in Europe for visual projection and percussion, that have been developed in collaboration with Beth Warshafsky. Excerpts from their program Behaviors, which utilizes a Max/Jitter interactive instrument they have been developing, working with sound and image bi-directionally (sound influences image, image influences sound), as well as with gesture and movement.

Gerry Hemingway has been making a living as a composer and performer of solo and ensemble music since 1974. He has led a number of quartet & quintets since the mid 80’s, including his current quintet with Ellery Eskelin, Oscar Noriega, Terrence McManus and Kermit Driscoll. Hemingway has collaborated with Mark Helias & Ray Anderson (BassDrumBone), celebrating its 36th anniversary in 2013; Reggie Workman and Miya Masaoka on koto (Brew); Georg Graewe & Ernst Reijseger, recently celebrating its twentieth anniversary (GRH trio); WHO trio with Swiss pianist; Michel Wintsch and bassist, Baenz Oester, as well as numerous duo projects with Thomas Lehn, John Butcher, Ellery Eskelin, Marilyn Crispell, Terrence McManus and Jin Hi Kim. Hemingway is a Guggenheim fellow and has received numerous commissions for chamber and orchestral work including Terrains, a concerto for percussionist and orchestra commissioned by the Kansas City Symphony. He also been involved in songwriting documented in the CD Songs, produced by Between the Lines in 2002 as well as his collaboration with songwriter John Cale. He is well known for his eleven years in the Anthony Braxton Quartet and more recently his duo with Anthony, Old Dogs (2007), released on Mode/Avant. His many collaborations with some of the world’s most outstanding improvisers and composers include Evan Parker, Cecil Taylor, Mark Dresser, Anthony Davis, George Lewis, Derek Bailey, Leo Smith, Oliver Lake, Kenny Wheeler, Frank Gratkowski, Michael Moore and many others. His rich musical history, collaborations, performances and recordings are all amply documented on his extensive website. Hemingway currently lives in Switzerland, having joined the faculty of the Hochschule Luzern in 2009.
gerryhemingway.com

Exploration of subjective experience and personal narrative informs much of Beth’s artwork across both traditional and digital media which includes video, animation, live projection, digital prints, photography, drawing, collage, writing and dance. Warshafsky’s work emerges over time, taking form amongst various layerings of image, text, sound and performance. She explores the amorphous boundaries between physical and digital space, still and moving mediums.This intuitive process connects to her past as a painter; she often feels like she is painting in time.
bskynyc.com