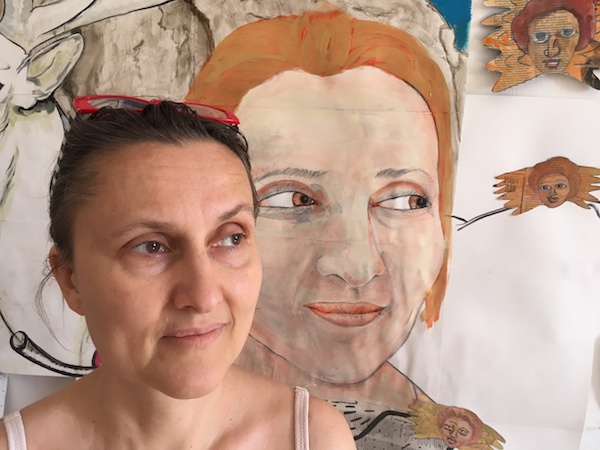 Andy and Gisburg met on the Park called American Playground in Brooklyn.
Coming from very different directions of music but still laughing about the same crazy musical stories, we had the idea of playing together for quite a while.
So this concert is our playground to blend different genres and music styles: songs from Gisburg’s childrens musical about Rose is a Rose is a Rose, original rock songs by Andy, and some all times favorite for Children (and Grown Ups) from Velvet Underground (yes we did change one or two lines).
Christine will provide the rhythmic fun.

Andy Schuman started playing guitar at the age of five and never stopped. Born and raised in Houston, Texas, he made his way via New Orleans to San Francisco where he played lead guitar in the legendary hardcore punk band, Verbal Abuse. Desiring change and melody Andy formed his own band in the 1990’s called Handfullaflowers with whom he recorded two albums. The band moved to Berlin where Andy lived in a large loft with artists Dorothy Carter and Bob Rutman. He has shared the stage with artists as varied as Weezer, Einsturzende Neubauten, Greenday, Ice T, The Ramones, the Circle Jerks, Dorothy Carter, Bob Rutman, the Beatsteaks and many more. Since 2000 Andy is creating music in Brooklyn. He began to play with close friends and formed the band Dark Horse. Last summer he was on tour working with Lou Reed. “Dark Horses” are in the process of recording their first album together entitled “Old Harbor Road” at Headroom Studios in Berlin with producer Marc Elsner. The album documents the period in Andy’s life when he was living in New Orleans.

Experimental composer/percussionist Christine Bard has performed her own music in concerts in Europe and in the USA, including NYC downtown venues and Celebrate Brooklyn in Prospect Park. She wrote solo percussion scores for such choreographers as Nancy Zendora, Wendy Osserman and Hope Clark. She has toured festivals in Korea, Brazil, USA, Canada and Russia. Christine has also performed and recorded with Marc Ribot, Makigami Koichi, James Pugliese, John Zorn, Eyvind Kang, Anthony Coleman, Elaine Kaplinsky, The Harry Partch Ensemble, the Downtown Ensemble, Bang On A Can All-stars, the Microtonal Orchestra and others. Her own groups include Easside Percussion (on Avant) and the post-ambient electronics group, ELX.

Gisburg is a composer and singer born in Salzburg/ Austria. She has toured around the world as a concert singer for new music with Dieter Schnebel and his vocal group Die Maulwerker. Settling down in NYC in 1992 she founded several groups for new music and recorded 3 CDs with her own compositions on John Zorn’s label Tzadik. With Phil Painson she founded the experimental trip hop band Douce which released the sound track CD High Life a movie by Lila Yomtoob. She is a member and assistant conductor for the chinese Hai-Tien choir with Mrs. Pi-Chu Hsiao and recorded with Gary Lucas chinese pop music of the 30’s and 50’s for label blue.
She also works as a sound and music editor for films with directors such as Woody Allen, Abigail Child, Ethan Coen, Robert Duvall, and Rob Marshall.
She wrote and produced the soundtrack for the controversial movie Hounddog by Deborah Kampmeier.