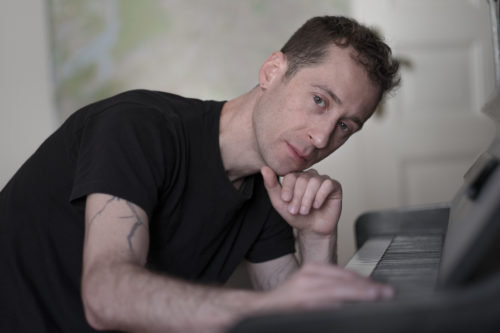 Music for an IMAGINARY BAND, led by composer-pianist Gordon Beeferman, is a (real) 7-piece group comprised of some of New York’s most uniquely creative musicians. The band explores the territory where classical ‘new-music,’ jazz and free improvisation intersect. Beeferman’s compositions range from the gnarly to the operatic, and are both incredibly detailed and very free; the band’s intensive improvisational explorations are tethered to highly structured frameworks.

The band’s first recording, a 7″ limited edition, will be released in late August on Generate Records.

GORDON BEEFERMAN is a composer and pianist whose work spans opera, orchestral and chamber music, improvisation, and collaborations with dance and other arts. His compositions have been performed by the Minnesota Orchestra, Albany Symphony, California EAR Unit, Quartet New Generation recorder collective, American Brass Quintet, eighth blackbird, and others. His chamber opera “The Rat Land,” performed by the New York City Opera on its VOX showcase in 2007 and 2009, was praised by the New York Times as “complex and daringly modern…Mr. Beeferman’s music, with its skittish melodic lines and pungent atonal harmony, is gritty, fidgety and intriguing.”

Since moving to New York in 1998, Beeferman has been an active member of the local music scene. He has performed in a wide range of settings, including Roulette, the Vision Festival, the Knitting Factory, MATA Festival, Improvised and Otherwise, Columbia University’s Italian Academy, and live on WNYC, WKCR and WFMU. His collaborations with choreographer Anita Cheng have been produced at the Joyce SoHo, Danspace, and Cunningham Studio.

Beeferman has received commissions from the Fromm Foundation, the BMI Foundation, and Concert Artists Guild, among others, and prizes including three BMI Student Composer Awards. He was a fellow at Tanglewood and a resident composer at the Copland House. He is a graduate of the University of Michigan School of Music, where his teachers included William Bolcom and William Albright for composition and Anton Nel for piano.

Beeferman’s recordings of improvised ensemble music are available on Generate Records; scheduled for release this year are chamber works on the Genuin and Summit labels. A 7″ vinyl recording by his IMAGINARY BAND will be released in the summer of 2009. www.gordon.inkbox.org