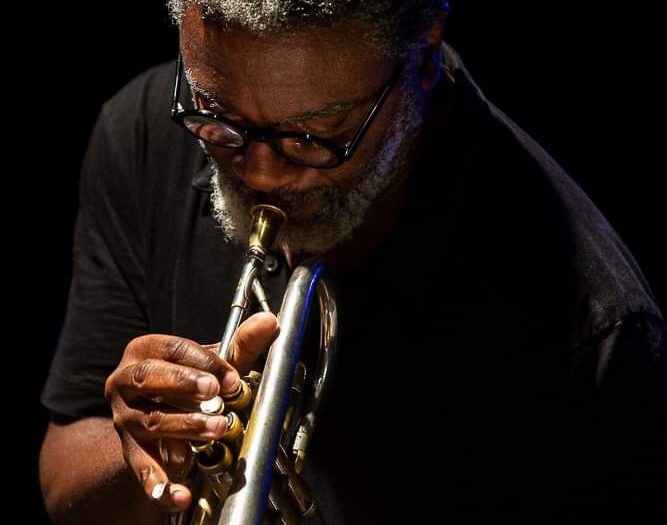 Monday, December 13, 2021. 8:00 pm
Innovative improvisers— percussionist Shakoor Hakeem, cornetist-composer Graham Haynes, and performer-composer Lucie Vítková—come together to perform work they have been working on over the last three years.

Graham Haynes is a cornetist composer. His relationship playing at Roulette goes back 35 years. He tours annually in Europe, Asia, Brazil and Africa and has appeared several times on national tv. He is in high professional demand as a musical director and composer for film, theatre, dance, and multimedia .

Lucie Vítková is a composer, improviser, and performer (accordion, hichiriki, synthesizer, harmonica, voice and dance) from the Czech Republic, living in New York. Their compositions focus on sonification (compositions based on abstract models derived from physical objects) while in their improvisation practice Lucie works with characteristics of discrete spaces through the interaction between sound and movement. In Lucie’s recent work, they are interested in the social-political aspects of music in relation to everyday life and in reusing trash to build sonic costumes. In their pieces, they use combined notation, such as graphic, audio, text and staff notation and their pieces range from diy cyborg solo performances to orchestral compositions. Lucie’s teachers and collaborators include George Lewis, Suzanne Cusick, Ellie Hisama, Miya Masaoka, Petr Kotík, Hitomi Nakamura, Teerapat Parnmongkol, Jolana Havelková, Muyassar Kurdi, Haruhiko Okabe, Jaroslav Šťastný, Teodora Stepančić, James Ilgenfritz, Stevie May, and Graham Haynes.

Fearless sideman percussionist Shakoor Hakeem, prolific up-and-coming talent, has a gift; Making experimental, Afro-diasporan, rhythmic improvisational music immediately enjoyable. Hakeem’s unique old-soul has him adhering to the cultural traditions of mysticism and folklore, within which are contained the secrets of his elders. The mythical experience of his stage presence evokes feelings that you are witness to a ceremonial gathering, of an ancient rhythmic history. In building this, he has long supported many of the most forward-thinking legendary improvisors, including Antione Roney, Graham Haynes and the illustrious Wallace Roney. Performing live with these great artists, he refrains from over- playing and prefers minimalism, playing within the musical, compositional contexts of colours and texture, delivering limited solo’s, all the while occupying the eye of the hurricane.