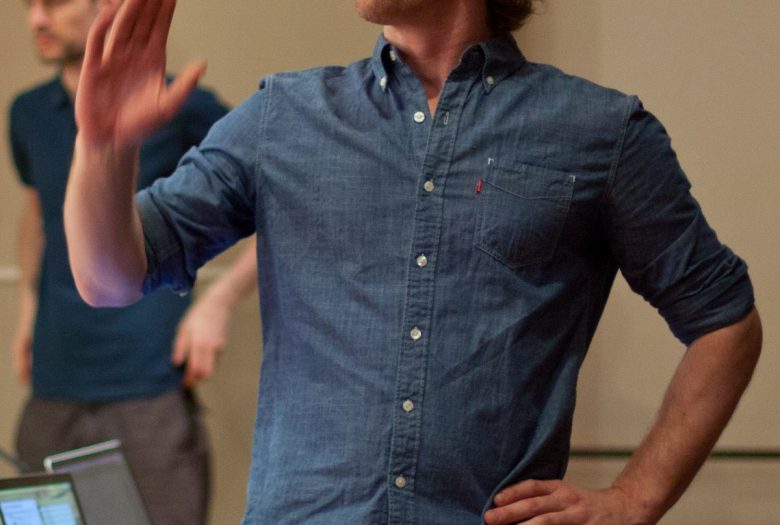 In celebration of Guy Barash’s debut album, Facts About Water on the Innova label, Roulette presents a retrospective of this intriguing composer’s recent works.  The pieces programmed represent highlights of Barash’s past three years of activity and projects currently in progress. As with those on the album, this evening’s works are drawn from many areas of Barash’s œuvre, including operatic, vocal, electronic, chamber, and multimedia with each exploring his central interests of music in time and space, such as the abstract phenomena of simultaneity, synchronicity, and geometry as manifested in different contexts and idioms.

A prose poem-like passage in Nick Flynn’s second memoir, The Ticking is the Bomb, provides the title for Barash’s debut release. This album represents Barash’s musical journey that started with them meeting one evening in a Brooklyn café in the fall of 2008 and which has evolved into a fruitful collaboration.

Facts About Water was produced by internationally renowned composer and producer Elliott Sharp.

This piece is the fourth in a series of compositions for acoustic instruments and interactive computer processing. With Talkback, Barash explores new playing techniques, enhanced timbre, and other sonic features that are characteristic of the instrument by magnifying and amplifying otherwise subtle nuances of the instrument and bringing them to foreground prominence.

Blind Huber, for soprano, tenor, clarinet, violin, trombone, guitar, piano, and marimba, is an audio/visual rendering of poems from Nick Flynn’s eponymous collection. In his book, Flynn invites us to consider the intricate geometry of the beehive. Barash derived his structural/textural pallet for this piece from the geometry of the beehive and the sonic environment within and around it. Jared Handelsman has designed the video projections for Blind Huber. He says:

“On an autumn afternoon, worker bees methodically seal a wooden seam of their hive with propolis. After a winter storm bees lie strewn in snowdrifts, the keeper explains that bees venture out in the storm to defecate and don’t make it back. During a dry spell in late spring bees gathering water from a source near their hives buzz over the water and create waves of turbulence with their wings on the surface as it reflects the sky. In late summer two swarms hang in the canopy of a maple tree. The keeper climbs the tree with a cardboard box in an attempt to capture the queens. Over a yearlong cycle of visiting the hives of a nearby beekeeper I gathered these and other images for Blind Huber.  To get close to the hives without getting stung I wore two layers of clothes, leather gloves and a hat with netting and tucked my pants into my socks. Guard bees attack anything coming close to their hive resulting in remarkable close up, abstracted images of the guards attacking the camera lens.”

In his recently completed string quartet, Guy Barash explores simultaneity and synchronicity as musical phenomena within the context of a psychologically disorienting microtonal environment. The world of electronic music inspired his original sound palette. By preserving sonic features idiomatic to the live, acoustic ensemble, alongside concepts appropriated from electronic composition, Barash exploits characteristics latent in, but less commonly associated with quartet writing, and leads the listener to a fresh, new sound world. The piece was commissioned by CBD Music, Inc.

In this opera based on text by Nick Flynn, four strangers meet on a New York City sidewalk during a black out.  Unable to make sense of their predicament, let alone alter it, the four float aimlessly in and out of seeming reality only to find themselves even more lost when electricity comes back on. Incorporating music for traditional instruments and voices, a rock-band, and real-time digital signal processing, the work will depict the absurd in the play with a relevant sound.

Guy Barash is a composer of contemporary classical music. His opus includes orchestral, chamber, vocal, and electroacoustic compositions, as well as music for theater. He has written an extensive body of work that incorporates text in various settings and arrangements.

Guy Barash’s collaboration with American author Nick Flynn on Proteus, a musical rendering of selected texts and excerpts from Flynn’s second memoir, The Ticking Is The Bomb, had its world premiere at Galapagos Art Space in February 2010. A commission from the Jerome Foundation, as part of his 2011 composer‐residency at Electronic Music Foundation, provided Barash the resources to compose and produce Blind Huber, based on 7 poems from the eponymous book by Flynn, alongside video projections by Jared Handelsman. It was premiered fall 2011 in Greenwich House.

In 2012 Guy Barash was a composer-­in­‐residence at Turtle Bay Music School, as recipient of Exploring the Metropolis’ Con Edison Composition Award. Currently he is a fellow composer in the American Opera Projects’ Composers & the Voice program. Barash is also the curator of the new music series, Eavesdropping, at Spectrum.

Premiered last November at La MaMa, and to be expanded this May at St. Ann’s Warehouse, the multimedia theater piece Hildegard (Vision Cycle), conceived of in concert with the Pioneers Go East Collective, tells obliquely the story of Hildegard of Bingen, the Medieval mystic and composer, an important pioneer in both metaphysical writing and the theory of music. It unfolds over four scenes modeled after the stages of migraine attacks. This aesthetic is closely linked to Barash’s multi-layered, non-linear compositional structure –  a spatial composition that unfolds, just like the play, not only over a time axis in the traditional way, but also utilizing the venue space as a collective “hearing device” that leads the audience through constantly developing sonic transformations.
http://www.guybarash.info

Nick Flynn’s most recent book, The Reenactments, which Kirkus calls “a truly insightful, original work,” completes a trilogy begun with Another Bullshit Night in Suck City (2004). His previous book, The Captain Asks for a Show of Hands (2011), was a collection of poems linked to the second book of the trilogy, The Ticking is the Bomb (2010), which the Los Angeles Times called a “disquieting masterpiece.” Another Bullshit Night in Suck City won the PEN/Martha Albrand Award, was shortlisted for France’s Prix Femina, and has been translated into fifteen languages. He is also the author of a play, Alice Invents a Little Game and Alice Always Wins (2008), as well as two other books of poetry, Some Ether (2000), and Blind Huber (2002), for which he received fellowships from, among other organizations, The Guggenheim Foundation and The Library of Congress. Some of the venues his poems, essays and non-fiction have appeared in include The New Yorker, the Paris Review, National Public Radio’s This American Life, and The New York Times Book Review. His film credits include artistic collaborator and “field poet” on the film Darwin’s Nightmare (nominated for an Academy Award for best feature documentary in 2006), as well as executive producer and artistic collaborator on Being Flynn, the film version of Another Bullshit Night in Suck City (2012, Focus Features, directed by Paul Weitz, starring Robert De Niro, Paul Dano, Julianne Moore, and Lili Taylor). A professor in the creative writing program at the University of Houston, where he teaches each spring, he then spends the rest of the year in (or near) Brooklyn.
http://www.nickflynn.org