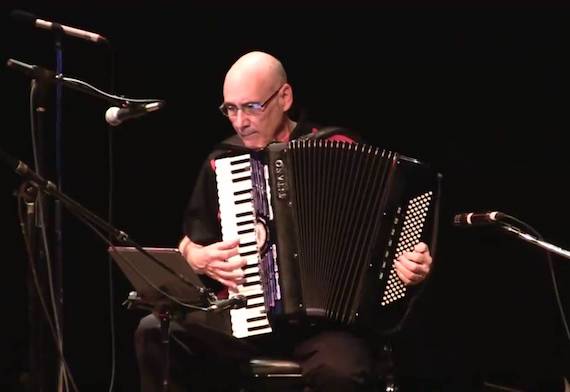 Accordionists/composers Guy Klucevsek & Alan Bern present a program that will include Bern’s Deep Blue C and Sideways, two suites written for Eliza Miller Dance Company, and the premiere of selections from Guy Klucevsek’s on-going musical day book, Notefalls. Othermusic.com says: “These two are at the absolute height of their profession “¦ Together, they sweep you up, carrying you on hard currents of sound.”

Guy Klucevsek has created a unique repertoire for accordion through his own composing and by commissioning over 50 works from composers such as John Zorn, Aaron Jay Kernis, Fred Frith, Alvin Lucier and Somei Satoh. He has performed his music internationally and throughout New York at Lincoln Center, the Bang on a Can Marathon, the Whitney Museum and Merkin Hall. He has also played with Laurie Anderson, Anthony Braxton, Bill Frisell, Fred Frith, the Kronos Quartet, Natalie Merchant and Pauline Oliveros. He has released 16 recordings as soloist/leader, including his latest solo CD, “The Well-Tampered Accordion,” on Winter & Winter.

Berlin-based Alan Bern is a composer, pianist, accordionist and musical director, with a special interest in solo and group improvisation. He is the director of Brave Old World, an ensemble known internationally for pioneering New Jewish Music. The group’s most recent CD, “Song of the Lodz Ghetto”, on Winter & Winter, was named best classical CD of 2005 by Newsday and one of the “10 best classical/world CDs” by Billboard. Bern holds an M.A. in philosophy from Tufts University and is completing a D.M.A. in music composition from the Cincinnati Conservatory.