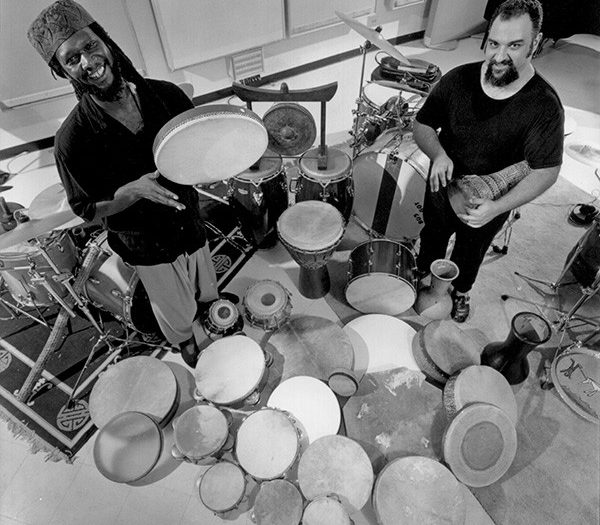 Hamid Drake has been a member of the Latin jazz band Night on Earth, the Georg Graewe Quartet, the DKV Trio, Peter Brotzmann’s Chicago Octet/Tentet, and Liof Munimula, the oldest free improvising ensemble in Chicago. By the close of the 1990s, Hamid Drake was widely regarded as one of the best percussionists in improvised music. Incorporating Afro-Cuban, Indian, and African percussion instruments and influence, in addition to using the standard trap set, Drake has collaborated extensively with top free jazz improvisers Peter Brotzmann, Fred Anderson, and Ken Vandermark, among others. –Bio as of 2019

Michael Zerang was born in Chicago, Illinois, and is a first-generation American of Assyrian decent. He has been a professional musician, composer, and producer since 1976, focusing extensively on improvised music, free jazz, contemporary composition, puppet theater, experimental theater, and international musical forms. As a percussionist, composer and collaborator, Zerang has over one hundred titles in his discography and has toured nationally and internationally to 35 countries since 1981, and works with and ever-widening pool of collaborators, primarily in The United States, Western and Eastern Europe. Zerang has collaborated extensively with contemporary theater, dance, and other multidisciplinary forms and has received three Joseph Jefferson Awards for Original Music Composition in Theater, in collaboration with Redmoon Theater, in 1996, 1998, and 2000. He currently tours and holds workshops in improvisational music and percussion technique, and teaches private lessons in rhythmic analysis, music composition, and percussion technique. –Bio as of 2019