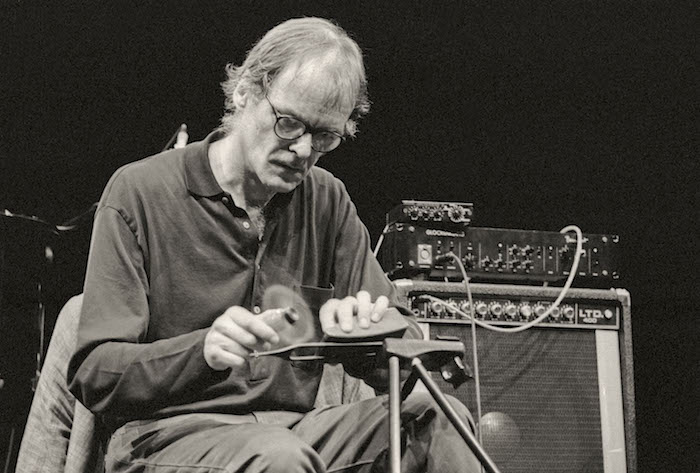 Guitarist from Berlin in a trio with Fred Frith, guitar and Ned Rothenberg, reeds.

Hans Reichel (May 10, 1949 – November 22, 2011)
was a German improvisational guitarist, experimental luthier, inventor, and typographer. His daxophone instruments and type designs are worth investigating.

Hans Reichel was born in Hagen, Germany. He began to teach himself violin at age seven, playing in the school orchestra until age fifteen. Around the same time, he began to play guitar and became interested in The Beatles, The Rolling Stones, and later, Frank Zappa, Cream, and Jimi Hendrix. He left music in the late 1960s to pursue font design and typesetting. He returned to music in the early 1970s, when he recorded a tape of guitar music. This recording was sent to the jury of the German Jazz Festival in Frankfurt, where he was asked to appear in a special concert for newcomers. Discussions with Jost Gebers, the founder of Free Music Production, led to the release on his debut album, Wichlinghauser Blues (FMP, 1973).

During the 1980s and ’90s, Reichel recorded solo albums and duets with Rüdiger Carl, Tom Cora, Eroc, Fred Frith, and Kazuhisa Uchihashi. He was a member of the September Band with Paul Lovens, Rüdiger Carl, and Shelley Hirsch. He also worked with groups led by Thomas Borgmann and Butch Morris. The record labels Intakt, Rastascan, and Table of the Elements released some of Reichel’s albums, compensating for the limited distribution of FMP. In 1997, he was named one of the “30 Most Radical Guitarists” by Guitar Player magazine. He died at the age of sixty-two in Wuppertal, Germany. –Bio as of 2019

Fred Frith is a songwriter, composer, improviser, and multi-instrumentalist best known for the reinvention of the electric guitar that began with Guitar Solos in 1974. He learned his craft as both improviser and composer playing in rock bands, notably Henry Cow, and creating music in the recording studio. Frith’s work has been performed by Ensemble Modern, Hieronymus Firebrain, Arditti Quartet, Ground Zero, Robert Wyatt, Bang on a Can All Stars, Concerto Köln, and Rova Sax Quartet, among many others. Frith continues to perform internationally, most recently with Christian Marclay, Ikue Mori, Mike Patton, Shelley Hirsch, Lotte Anker, the Gravity Band, and Cosa Brava, whose second CD, The Letter, was released in 2012 on the Intakt label. Fred is the subject of Nicolas Humbert and Werner Penzels’ award-winning documentary film Step Across the Border. –Bio as of 2019

Composer/performer Ned Rothenberg has been internationally acclaimed for both his solo and ensemble music, presented for the past 33 years on five continents. He performs primarily on alto saxophone, clarinet, bass clarinet, and the shakuhachi—an endblown Japanese bamboo flute. His solo work utilizes an expanded palette of sonic language, creating a kind of personal idiom all its own. In an ensemble setting, he leads the trio Sync, with Jerome Harris, guitars and Samir Chatterjee, tabla; he works with the Mivos Quartet playing his Quintet for Clarinet and Strings and collaborates around the world with fellow improvisors. Recent recordings include this Quintet, The World of Odd Harmonics, Ryu Nashi (new music for shakuhachi), and Inner Diaspora, all on John Zorn’s Tzadik label, as well as Live at Roulette with Evan Parker, and The Fell Clutch, on Rothenberg’s Animul label. –Bio as of 2019