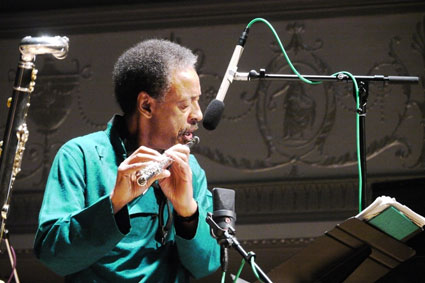 Roulette presents 3 nights of Henry Threadgill’s ground breaking group ZOOID, showcasing a collection of new work in preparation for their next studio recording. Threadgill, hailed by Nate Chinen of The New York Times as “one of the most thrillingly elusive composers in and around the jazz idiom:” is one of the great musical masterminds of the past quarter century – a composer, arranger, and innovator who transcends genres in contemporary music.

ZOOID featuring Liberty Ellman (acoustic guitar), Jose Davila (trombone and tuba), Stomu Takeishi (acoustic bass guitar) and Elliot Humberto Kavee (drums), is based on a musical language developed by Threadgill. Compositions are organized in blocks and assigned to each musician who in turn can use them independently, throwing in elements of improvisation and utilizing counterpoint. The term Zooid describes an independent organism that works together like a colony, Threadgill has often used this comparison for his music explaining that the music is a group of independent voices coming together to create a whole sound. Threadgill has recorded or performed with many of the legends of the jazz avant-garde, including Anthony Braxton, Muhal Richard Abrams, Roscoe Mitchell, Joseph Jarman, David Murray and Bill Laswell.