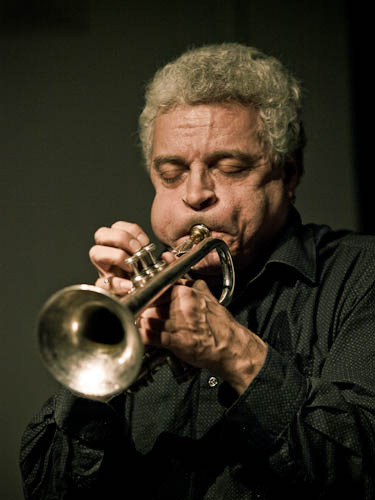 Herb Robertson’s Shades of Jazz on Noir at Roulette 2008

Shades of Jazz on Noir

The Shades of Jazz on Noir film presents excerpts from the classic film noir works of the 1940s and 1950s crafted to express the fatality, passion, and danger created by directors who pioneered the lively lighting techniques and psychologically expressive approach to classic noir. Shades of Jazz on Noir is projected onto a large screen as documentary and is the second instalment of a film noir and jazz series created for Luxembourg European Cultural Capital 2007. The first film, A Touch of Noir was a view from the wounded male perspective ala James Dean and has been performed in Europe (Luxembourg, Netherlands). Shades of Jazz on Noir is viewed from the Femme Fatale of those classics creating a fresh and unusual media experience. Shades of Jazz on Noir will combine the passion and despondency of classic film noir with the texture and dynamism of modern improvisation, resulting in a unique, growth oriented experience for students of film, jazz
and new music. This highly original project features Herb Robertson & Matt Darriau with special guest who will literally plate jazz on Noir. Film by Ana Isabel Ordonez.

Matt Darriau, saxophonist, clarinettist, ethnic-woodwind specialist and composer, Darriau has made several innovative contributions to the New York music scene. His background in the fertile and eclectic milieu of the New England Conservatory of Music’s Third Stream Program in the 80’s, and the continued practice of Balkan, Klezmer and Celtic folk idioms, have helped shape his aesthetic and passion for creating new and unusual music. He has been awarded grants and commissions from the NEA, Chamber Music America (2005/7) and is a Grammy winner (2007) with his Klezmatics band. He is considered as one of the 150 most influential jazz musicians of the last fifteen years, for the impact he has had in bringing Balkan and world rhythms to jazz with his band Paradox Trio. He is active as composer-musician in his band, Ballin’ the Jack, the Klezmaticks, Desastro Totale and Yo Lateef. Darriau plays with Roberto Rodriguez Septet, Frank London’s Klezmer Brass Allstars and his recently formed and the Recycled Waltz Orchestra. He has recorded and performed with Gunther Schuller, David Byrne, Marc Ribot, Ken Butler, Ben Folds 5 and many others on the NY scene. Paradox Trio has written and performed live music scores for the silent films Battleship Potemkin (Eisenstein), Un Chien Andalou (Bunuel/Dali) and Isaac Babel’s Benya Krik.

Pianist/Composer Angelica Sanchez was born in Phoenix, Arizona. Sanchez moved to New York in 1995 and has since played with: Susie Ibarra, Tim Berne, Mario Pavone, Trevor Dunn, Mark Dresser, Ed Schuller, Judy Silvano, Greg Tardy, Reggie Nicholson, George Schuller, Jeff Williams, Daniel Carter, Mike Sarin, Tony Moreno, Ben Monder and many more. Sanchez leads her own groups, a trio with Chad Taylor & Chris Lightcap and a quintet featuring Marc Ducret, Tony Malaby, Drew Gress, and Tom Rainey. Her debut recording “Mirror Me” was chosen as one of the “Best New Releases for 2003” in All About Jazz and made the top ten JazzTimes Critics’ Picks list 2003. She is also the recipient of the 2007 Chamber Music America French/American Jazz Exchange. Her new quintet recording will be released on the Clean Feed label in the Fall of 2008.

Dr. Ana Isabel Ordonez, biologist, jazz editor, music and art promoter was born in Colombia and educated in Europe. A self-taught Victorian patchwork maker, she has worked on this art since the early 90s and has presented her craft in France and Luxembourg. She is also an accomplished scientist who began training on insect pathology and biological control research at the age of eighteen and has lectured and cooperated in miscellaneous capacities throughout South America, Europe, Africa, East- Europe, Japan, China and New Zealand. Ana Isabel Ordonez is an Agronomic Engineer with Master’s and Doctoral degrees in Genetics, Forestry and Animal Biology. She was awarded by the Colombian Society of Entomology with the national prize “Hernan
Alcaraz-Viecco”. In 2004 she published a book which enlightens integrated pest management strategies in Luxembourg and numerous articles on the value of nature. She has been a recipient of multiple grants from Ecole National des Eaux et For?ts France, Mus?e National d’Histoire Naturelle de Paris, Marie Curie European Union Research Grant, Minist?re de la Culture Luxembourg. She was recently granted by the Dutch Embassy Luxembourg, the American Embassy Luxembourg and Ville de Dudelange for her film projects on film noir and jazz. Besides her work as scientist and director of BioProDev S.C, she is Jazz Editor at Jazzreview.com, the manager of famous jazz musicians and is chairperson of a non-profit association dedicated to promote art, musicians, crafts, culture and literature-noir. Since 2005 she co-owns Ruby Flower Records, a music label based in the USA and Europe which promotes and produces avant-garde jazz, art and new music in its most extreme forms.

David Chevan – was musically active from an early age. Although much of his performing method on the double-bass has been self taught, Chevan credits the master bassist, Lisle Atkinson with showing him the pathway to self-education. As a composer Chevan has primarily focused on works for improvisors. He has written works for a wide range of artists and ensembles, including several collaborations with dance and film. In addition to performing regularly in a duo with pianist Warren Byrd and leading their group, The Afro-Semitic Experience, Chevan has had the opportunity to perform and record with a wide range of creative musical artists, including Ali Ryerson, Joe Beck, Jaki Byard, Harold Danko, Ellery Eskelin, Giacomo Gates, Frank London and Andrea Parkins. He is an Associate Professor of Music at Southern Connecticut State University in New Haven.