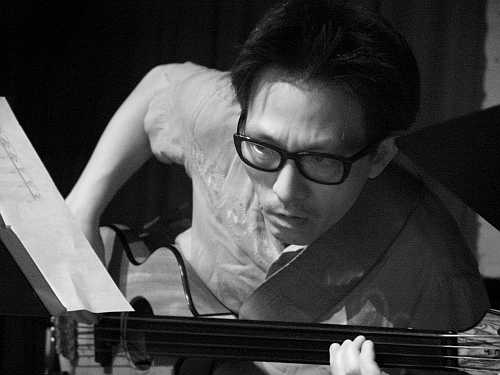 Tremolo of Joy is a hybrid band utilizing old & new musical elements. The music is shaped around the imaginative melodies of Kato Hideki. The group builds on this foundation with tools like canon (delay), counterpoint (reverse), human loops and live electronics. The result is combines chamber music syntax with the rhythmic excitement of rock ‘n’ roll. Tremolo of Joy: the vocal cry of Native Americans prior to a hunt or fight.

Bassist Kato Hideki is the co-founder of Death Ambient with Ikue Mori and Fred Frith. Kato leads Green Zone with Otomo Yoshihide and Uemura Masahiro and Omni with Nakamura Toshimaru and Akiyama Tetsuji. His collaborations include an electro-acoustic duo with James Fei and a multi-media project with Nicolas Collins.

Marco Cappelli is a classically trained guitarist. His solo CD, Extreme Guitar Project, was released on Mode Records in 2006. He is also a member of the Napolitan Contemporary Music Group, Ensemble Dissonanzen.

Saxophonist Briggan Krauss has performed with John Zorn, Wayne Horvitz and Bill Frisell and is a founding member of Steven Berstein’s Sex Mob. Other collaborations include Systems with Raha Raissnia.

Calvin Weston is a Philadelphia based drummer who has worked with Ornette Coleman & Prime Time, James Blood Ulmer, Lounge Lizards, Marc Ribot and many others. He collaborates with Billy Martin as a duo and also plays in Eyvind Kang’s Dying Gound with Kato Hideki. Most recently he is active performing with his own group Big Tree.