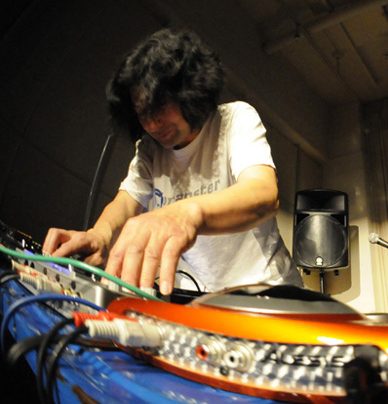 The renowned keyboardist/producer of the post-industrial-sci-fi-jazz/heavy-rock improvisational band OPTICAL-8 from Tokyo will improvise one set with guests including Naval Cassidy and perform the other with THE POOOL – a collective of artists improvising video and music in real time, bringing the immediacy of live video to cinematic arts. Benton Bainbridge, Angie Eng, and Nancy Meli Walker play cameras, switchers, and processors which capture commonplace props and detritus and transform them into moving paintings which are set to a soundscape collage of transfigured samples and traditional instruments.

Hoppy Kamiyama is an artist whose many and varied creative incarnations resist definition. He has produced work in a significant quantity of different genres, some of which would not formally fit the P.A. mold. Nonetheless, even those titles which might better suit a noise-punk or classical leaning tag often display a great number of visionary and/or experimental elements which easily defy any staid definition applicable to their overall genre – they move with a feel many would indeed call “progressive.” Some of the titles which fit the Avant-Proggressive tag are albums he has released under his own name as a solo artist, and these are the albums for which he has garnered this particular listing. Kamiyama has played with: George Clinton, John Zorn, Marc Ribot, Maceo Parker, Zeena Parkins, Elliott Sharp, Hugh Hopper, Chris Cutler, Daevid Allen, Kramer, Amy Denio, God is my Co-Pilot, GONG, MAGMA, Bill Laswell, Gary Lucas, The Creatures, Elton Dean, Steve Albini, Sebastian Stainberg, Dougie Bowne, Jane Scarpantoni, Half Japanese, Hugo Fattoruso, Bradford Reed, Damo Suzuki, etc. —Bio as of 2019